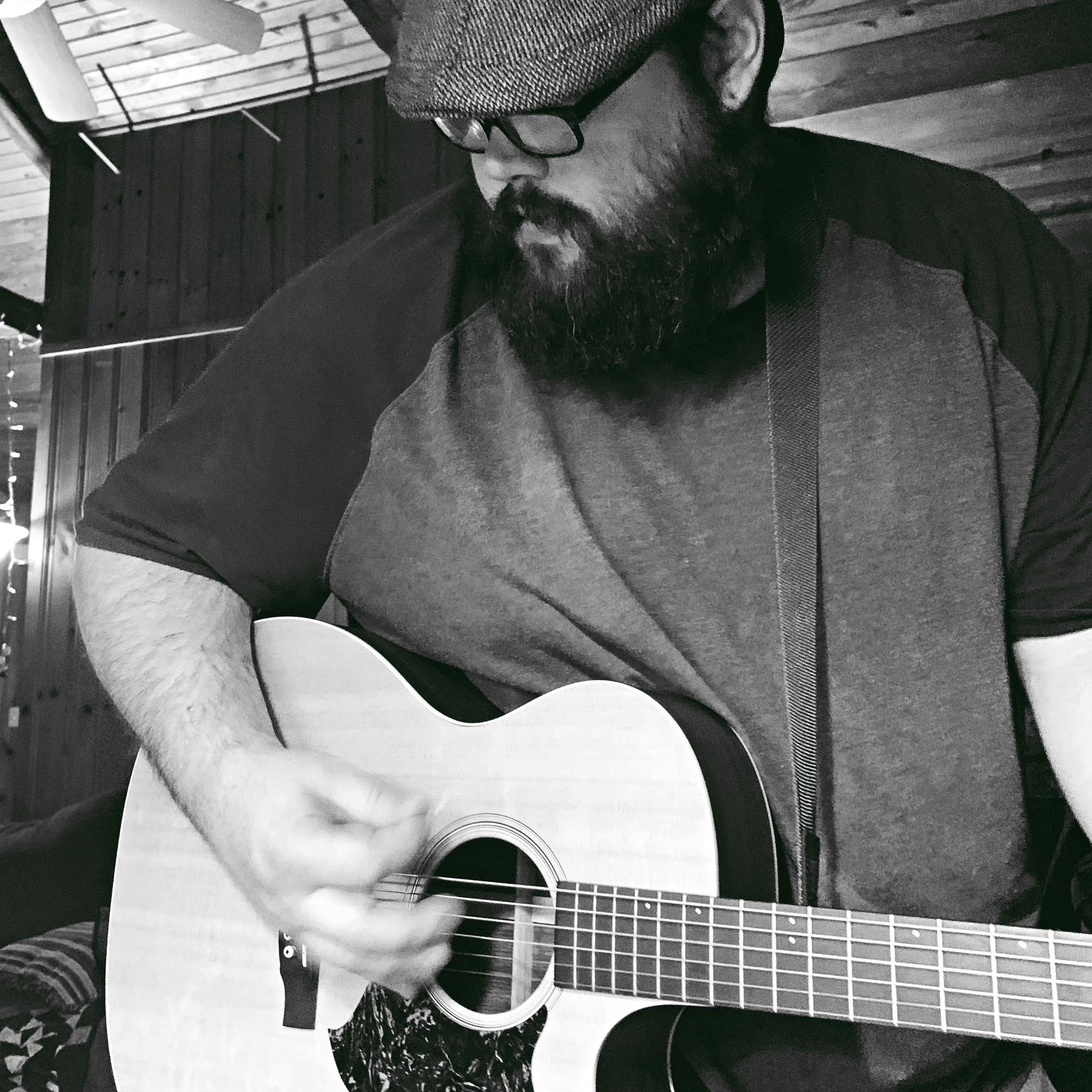 “At a recent show, this lady came up to me and told me that it sounded like I wrote her life story. Those are the kinds of connections I wanted to make,” says Michael Spagnolo, singer, guitar-player, and founder of Northbound Soul. “Sometimes, it makes you feel less alone in the world.” Northbound Soul began as Mike’s solo project after a journey of trial and error through the diverse world of music, with its many genres and bands.

Mike has been a musician since his early teens. His friends taught him to play the guitar, and he taught himself the drums. Since the beginning, he always wanted to write an entire album of his own music.

He was a guitar player and a singer in his first band, but they never played live. When that band took a hiatus, some of its members joined others to form “Casting Shadows”, giving Mike his first taste of playing live. A drummer at the time, he was a nominee for the “Erie’s Best Drummer” category for the first ever Rock Erie Awards.

When Casting Shadows split, Mike joined a local metal band called “Victims, Aren’t We All…” as a guitar player and a driving force in the songwriting process. Around this time, the singer of Casting Shadows created a new band that would become “Sean Patrick and the Newgrass Revolution.” Both Mike and the Bass player for Victims were recruited to help start the new band.

While playing for Newgrass, Mike explored the singer-songwriter and country music genres, which formed the foundation for Northbound Soul. The eventual split of Newgrass Revolution allowed Mike to focus on writing his own songs for his dream project. In 2017, he began writing and recording. The following year, he played his first show at an open mic night at the Tipsy Bean Coffee Shop in Erie, and for the first time in his musical career, he felt at home. In March 2019, Mike recruited his long-time friend Alan Bickel as a drummer and they settled on the band name Northbound Soul.

What does your creative process look like? Do lyrics or melody come first, or do they come together?

My writing process always starts the same way: I pick up my acoustic guitar, play around with chord sequences and capo positions until I find an interesting flow. Music for me always comes first, once I have the basic idea down, I listen to it and see if there is a story that the music is trying to tell. For instance, my song “Here and Now” sounded like a break up song so I used that idea to write the words. The lyrics are next and I will adapt the music to try and fit the words if need be.

My drummer, Alan Bickel, is usually the first one to get a demo of a new idea. Usually, it’s a crappy recording from my phone attached to a text message asking “what about this” then he will give me some input. I also have a short list of friends who I send almost finished songs to and get their opinion on. I picked friends who have very different tastes in music because if I can connect with an audience that’s outside my genre I feel like I'm on the right track with that tune.

How does your approach differ with acoustic versus the heavy metal you used to do?

When I was playing metal it was more of a group effort. I would come up with a riff and bring it to practice then the guys would put their two cents in and offer their opinions about how it should sound. Also, I had no input about the lyrics, we left that up to the singer.

With Northbound Soul I am the sole writer of the music and lyrics, it is a direct reflection of my thoughts and feelings. 90% of my songs are based on actual people and events in my life; even the made up stories have some grains of reality in them.

Do you ever wish you had started Northbound Soul sooner, or do you feel that the experience you had with other bands was necessary to prepare you for what you’re doing now?

Yes and no. It’s been a dream of mine to write a whole collection of songs by myself and it took many years to get that process started, so in that regard I wish I would have started doing it sooner. Without a doubt, though, playing with the other bands taught me how to interact with other musicians in a collaborative sense,  as well as opening experiences up to new music that I may not have discovered on my own.

Do you feel that writing a song about a situation helps you move past it in terms of reflecting and better understanding what happened?

Again, yes and no. Writing a song about a situation helps me explore the feelings surrounding that circumstance and that is definitely therapeutic in its own right, but then to revisit those songs every time I play, it forces me to face those emotions again. I have a song called “The Hill” that is particularly difficult for me to play. When I wrote the song I had 4 friends in mind, one who is still with us and 3 who have passed on. I combine a little piece of each of their stories to create one idea. I face those feelings of loss and wondering why it happened when I play it, every time. I don't think I will ever move past it.

What goes through your mind when you play a song in front of people?

“Don't screw up” and there's still some self doubt. Will people be receptive to what I have to say? Is there something someone in the audience will hear that they will connect with? I just try to give the best performance I can.

Have you ever wondered what someone would think if they found out a particular song was about them? Does that ever worry you?

Not really, I don't write anything too scandalous or inflammatory that would put someone off like that. I do a lot of mash ups with ideas. So one song could be about several people and not one particular person but a verse to a song may be directly influenced by a conversation we had or an observation that I made. An example of that would be “the Hill” as I mentioned before and another song called “Darling Don't You Cry”. That song is about my youngest son and a new kid in his class last year and how he was welcoming to her when she was scared and he kind of took her under his wing, but in the second verse I borrowed a story line from a friend of mine of 20 years.

What is your favorite song you’ve written and why?

Probably “The Hill”. It has two ideas in the same story. It’s about my friends who are no longer with us and their story but it also touches on an idea I had about how someday we are all just stories in the end. I was thinking about photo albums on a shelf and how so many people in them may not be with us and as time goes by the stories of our lives become less and less with passing generations. I'm sure many people have had the experience of looking through a photo album with their parents or grandparents and they point out an old photo and all that’s known about the person was their name, maybe a few small details about them, but then they go back on the shelf. I know it’s a sad concept but it's the only place I can visit those friends now so I wrote a song about it. The last chorus of the song is “photographs... connect me to the past, albums in my room, of friends who have gone too soon. photographs… memories of the past, just sitting on the shelf, waiting for someone else”. As mentioned in the other question this is line I get choked up a lot on when playing it live because one of the friends who influenced the song is the person who introduced me to the guitar when I was 13 and I wish he was still here.

Do you think you express yourself more through music than when you’re just talking to someone?

Without a doubt my music is a window to my thoughts and feelings. I like to think about what I'm going to say before I say it (most of the time). So yes because I put a lot of thought into the words of my songs and the idea I'm trying to put forth. Sometimes talking face to face I don't have that time to think and can come off wrong.

What are some things writing your own songs has made you realize about yourself?

I’ve realized that I shouldn't doubt myself as much. I was so apprehensive to attempt to write and perform a song on my own outside of a band setting, I wish I would have given it shot earlier. It’s a weird position to be in when you create something and want to share it. But, then there’s always this voice in the back of your head that questions whether it is good enough and if your art will be received or not by people. So that can be scary for some people, but once you do it you find that there is a lot of supportive people out there.

How do you feel you have grown as a person through your music?

By focusing on my project it has made me a better musician and given me confidence to share my art. I still have moments of self-doubt, especially when playing a new venue and to a new crowd of people but so far my music has been well received by people. At a recent show this lady came up to me and told me that it sounded like I wrote her life story. Those are the kinds of connections I wanted to make. Sometimes, it makes you feel less alone in the world.

Thank you, Mike, for taking the time to talk with us. You can check him out on Instagram and Soundcloud.