The City of Erie is slated to receive another large scale mural. The site for this new piece of public art are the basketball courts at Bayview Park. The initiative led by Erie Arts & Culture is a collaboration with the agency’s CHROMA Guild and is funded with support from Brian and Linda Graff, Erie Insurance and the Pennsylvania Department of Community and Economic Development through the Neighborhood Assistance Program (NAP), and a special grant from the Erie Community Foundation.

Brian and Linda (Hoehn) Graff made their first contribution to Erie Arts & Culture in 2019 as part of Erie Gives. That donation funded the mural “Rudy,” located on Methodist Towers and painted by international artist Evoca1. The Graffs made another contribution to Erie Arts & Culture on Erie Gives 2020 and that gift is supporting this mural project.

"We support public art because it is fun, unexpected, and makes people smile," said Linda. "We are also excited about the opportunities public art offers to local artists to display and develop their art while making Erie a more engaging place to live."

For this project, Erie Arts & Culture has commissioned Miami-based artist Mwanel Pierre-Louis. As a muralist, Mwanel has left his mark in cities throughout the United States. Before his arrival in Erie, his paintings will be on exhibit in a one-person show in Portland, Oregon.

To help execute the project, Erie Arts & Culture will provide two members of the CHROMA Guild with paid opportunities to serve as Mwanel’s assistants and learn the art of mural painting directly from the artist. Mwanel will be in Erie September 14-26, and the project will be completed within the duration of his visit. To help inform Mwanel’s design and raise awareness of the project, members of the CHROMA Guild have been conducting community outreach and engagement in the neighborhood surrounding Bayview Park. Erie Arts & Culture has also worked closely with Anna Frantz, the Executive Director of Our West Bayfront, and City Council Member Melvin Witherspoon in the planning of this project.

In addition to the mural, Mwanel will work with master printer Doug Eberhardt to create a limited edition production of fine art prints. These prints will be made available for sale through the artist. Limited to a run of 25 prints, Doug will create the edition as a CMYK screen print.

Antonio Howard, CHROMA President, stated, "There are several reasons why it’s important for the CHROMA Guild to have opportunities to work alongside and learn from artists like Mwanel.

One: Apprenticing builds capacity and confidence in artists as we grow in our artistic disciplines and relieves us of the often paralyzing anxiety of having to figure it out alone. Two: Working alongside other artists expands an artist’s social network and fosters cooperation instead of competition among artists. Three: The lack of prior experience is often a deterrent for artists when applying for art projects and funding. This means that without opportunities like this, artists are always one prior experience short of qualifying for the next opportunity.

It’s also important to have an artist of color leading a project like this because it’s empowering to see another artist of color succeeding in the creative spaces we have historically been shut out of. It’s also helpful to learn how other artists of color navigate the obstacles that accompany being an artist of color. As a society, we have come to acknowledge the importance of having teachers that reflect the demographic makeup of their students. The positive impact of that extends beyond childhood and well into adulthood and specifically in artistic spaces."

Mwanel Pierre-Louis is an artist based out of Miami, FL. His work combines realism and abstraction in a narrative that draws from personal interactions and pop references. Mwanel's paintings feature juxtapositions of fragmented experiences and a strong emphasis on the relationship between subject and color. Born in NY, from Haitian descent, he's spent time living and absorbing the culture from New York, Miami and Los Angeles. Pierre-Louis attended New World School of the Arts' high school program in Miami, Florida and Art Center College of Design's illustration program in Pasadena, California. His clients include Starbucks, Fader Magazine, Adidas and Atlantic Records. Mwanel's work has been exhibited in Scope Art Fair during Art Basel, Miami and Switzerland, as well New York City. He’s been apart of the 5th annual POW!WOW! Hawaii's "Exploring the New Contemporary Movement" in the Honolulu Museum of Art. 2019, Mwanel had his first solo show with Thinkspace Gallery in Los Angeles and continues to have more shows with galleries as Talon, Antler, Spoke Art and Nucleus Galleries.

About the CHROMA Guild:

The CHROMA Guild advances opportunities and access to resources for creative and cultural professionals of color in Northwestern Pennsylvania. The regional network builds both individual and organizational capacity by expanding equity and inclusion within the area’s cultural and creative sector. 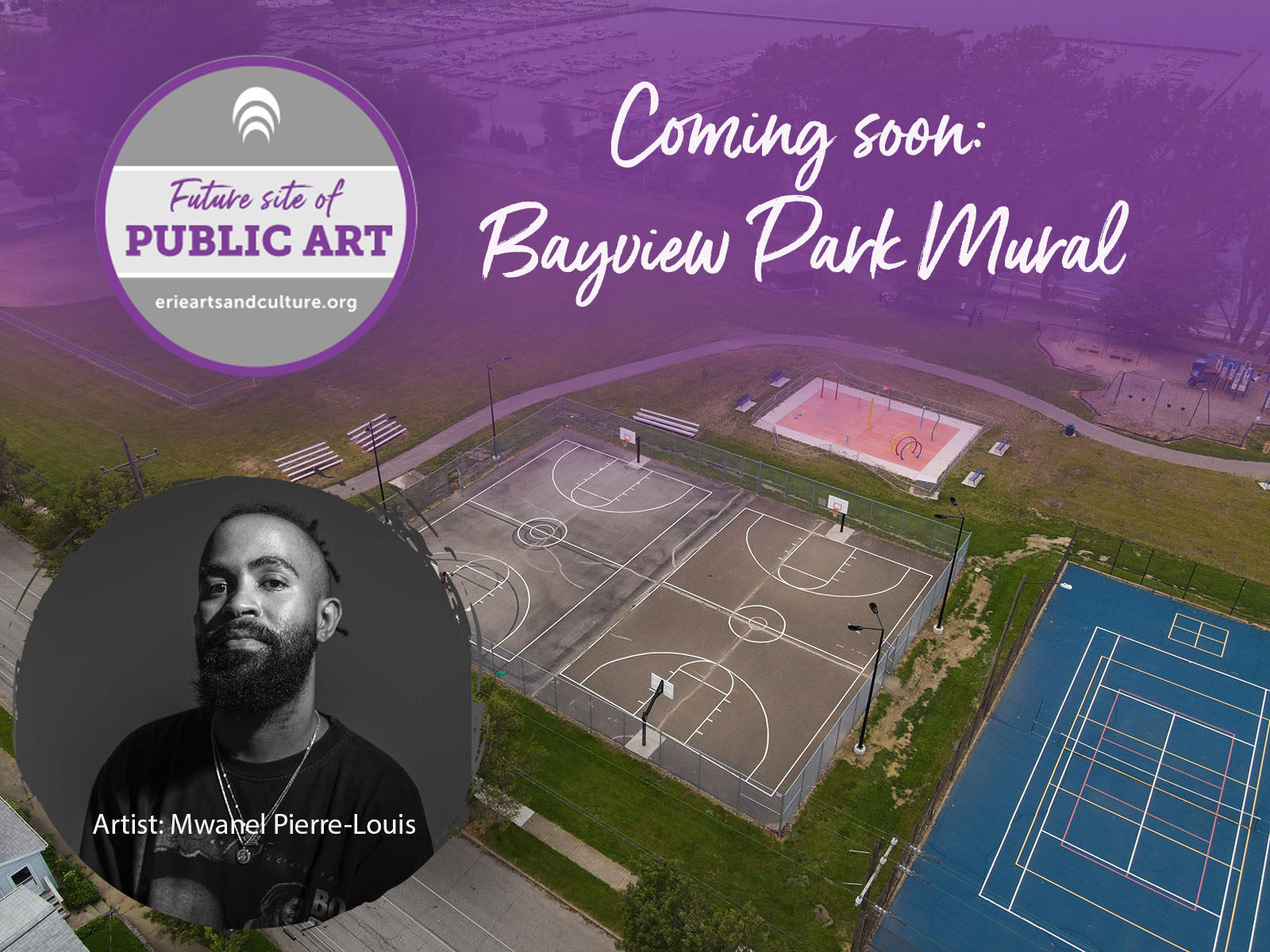 Pictured: Erie Arts & Culture has commissioned Miami-based artist Mwanel Pierre-Louis. As a muralist, Mwanel has left his mark in cities throughout the United States.  To help execute the project, Erie Arts & Culture will provide two members of the CHROMA Guild with paid opportunities to serve as Mwanel’s assistants and learn the art of mural painting directly from the artist. 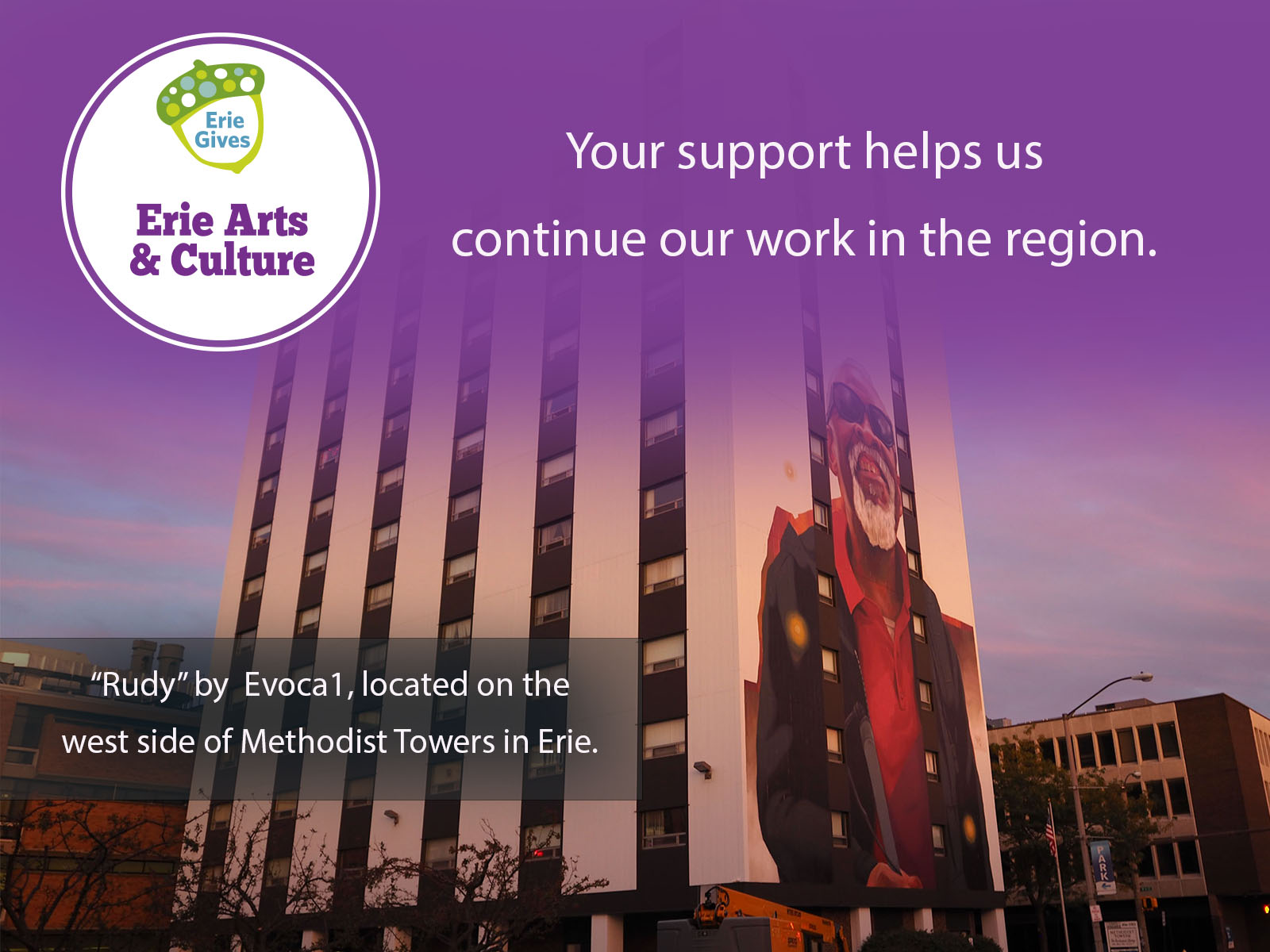 Pictured: Brian and Linda (Hoehn) Graff made their first contribution to Erie Arts & Culture in 2019 as part of Erie Gives. That donation funded the mural “Rudy,” located on Methodist Towers and painted by international artist Evoca1. 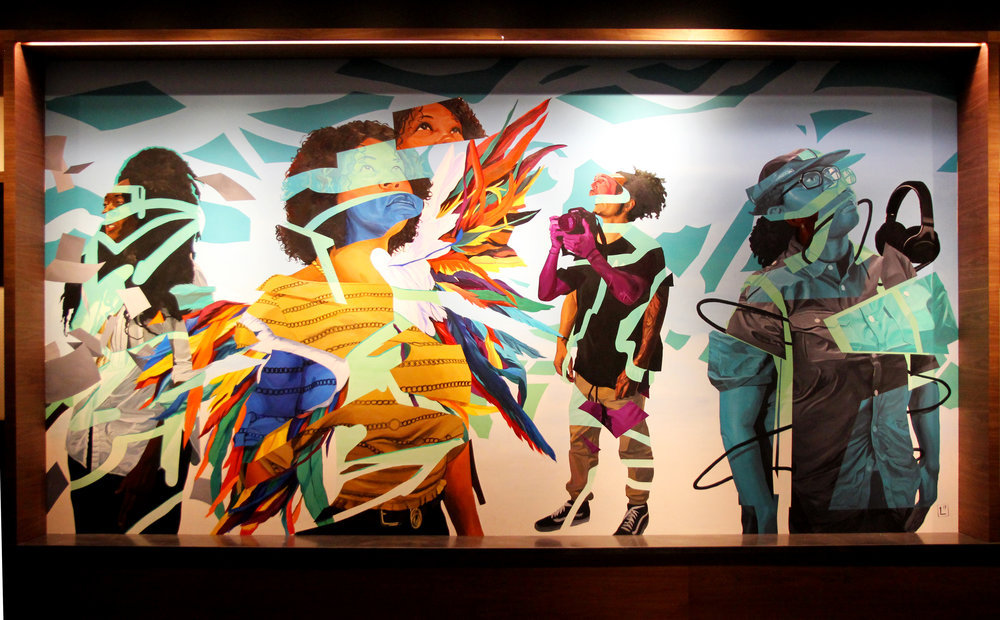 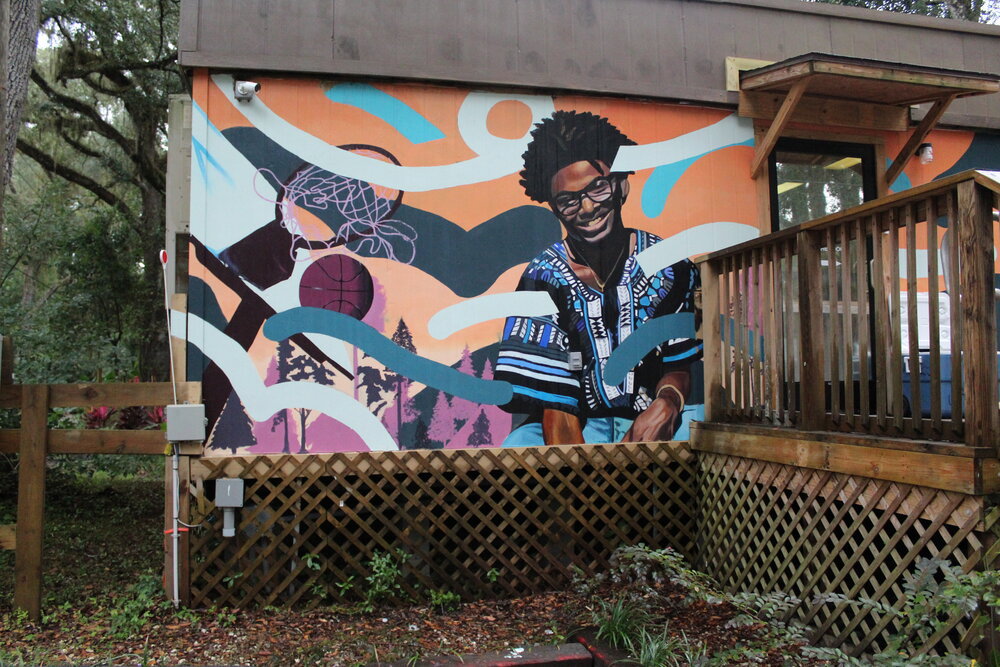 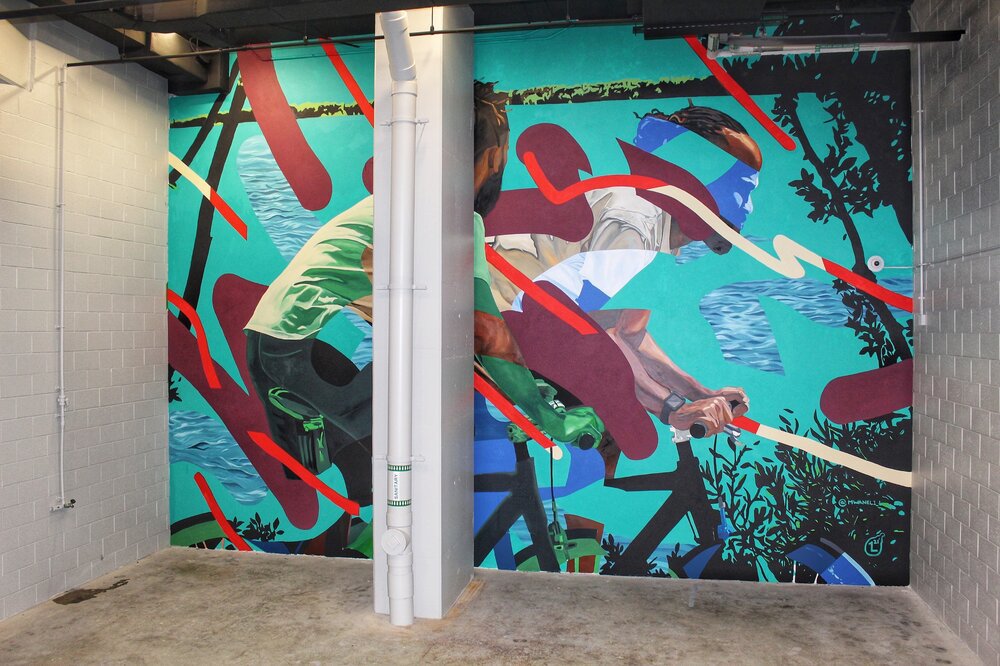 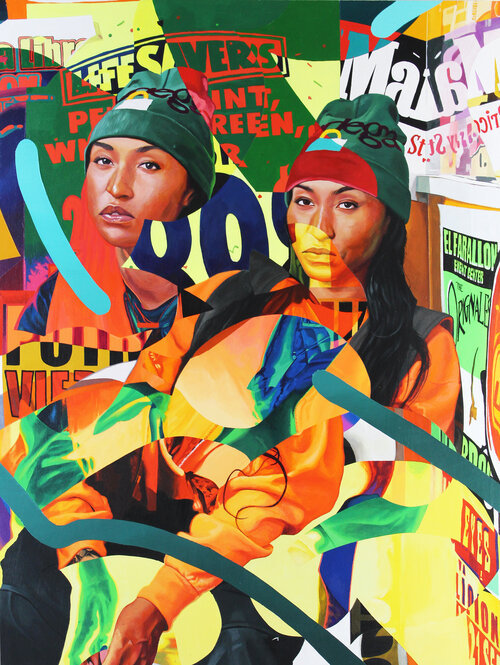 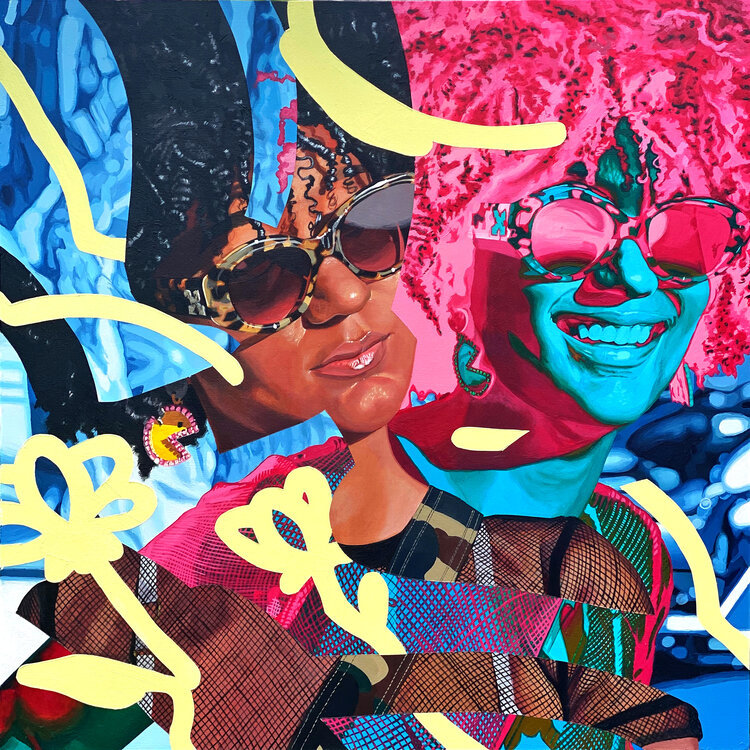