In celebration of Black History month, Erie Arts & Culture presents a section of the Discovery Trail, a new public art project which enhanced 24 utility boxes with vibrant artwork to celebrate Erie’s history, landmarks, and diversity.  Highlighted in this blog post, this section of the trail features the work of local graphic designer, Nick Warren, who chronicled the lives of eight Black "trailblazers" through colorful imagery and narratives.

We invite you to read about these individuals who have enhanced the Erie region and changed history forever through their service to others and their community.

Funding for the Discovery Trail was provided in part by the Erie Community Foundation through a 2019 Shaping Tomorrow Grant. 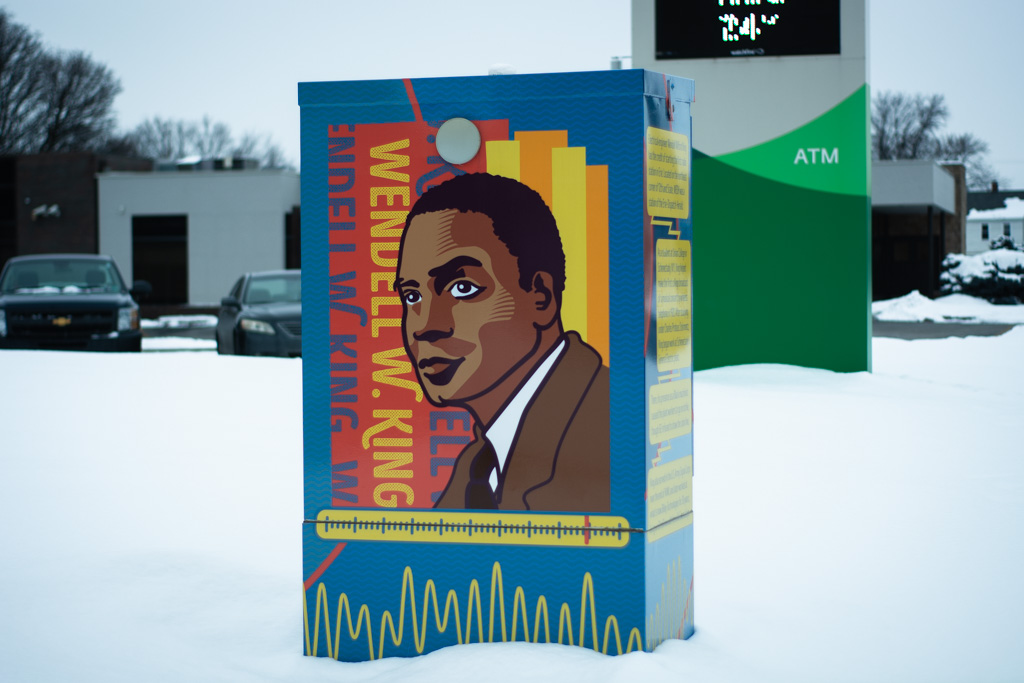 Electrical engineer Wendell Wilford King has the credit of starting the first radio station in Erie. Located on the northeast corner of 12th and State, WEDH was a station of the Erie-Dispatch-Herald.

As a student at Union College in Schenectady, N.Y., King helped make the first college broadcast of a musical concert by wireless telephone in 1920. After studying under Charles Proteus Steinmetz, King began work at Schenectady’s General Electric Plant.

There, his practice as a Black machinist caused the plant workers to go on strike, though GE refused to draw the color line.

King also served in the U.S. Army Signal Corps near the end of WWI, and later worked at what is now Bliley Technologies for 30 years, living on Bird Drive with his wife Gwendolyn. 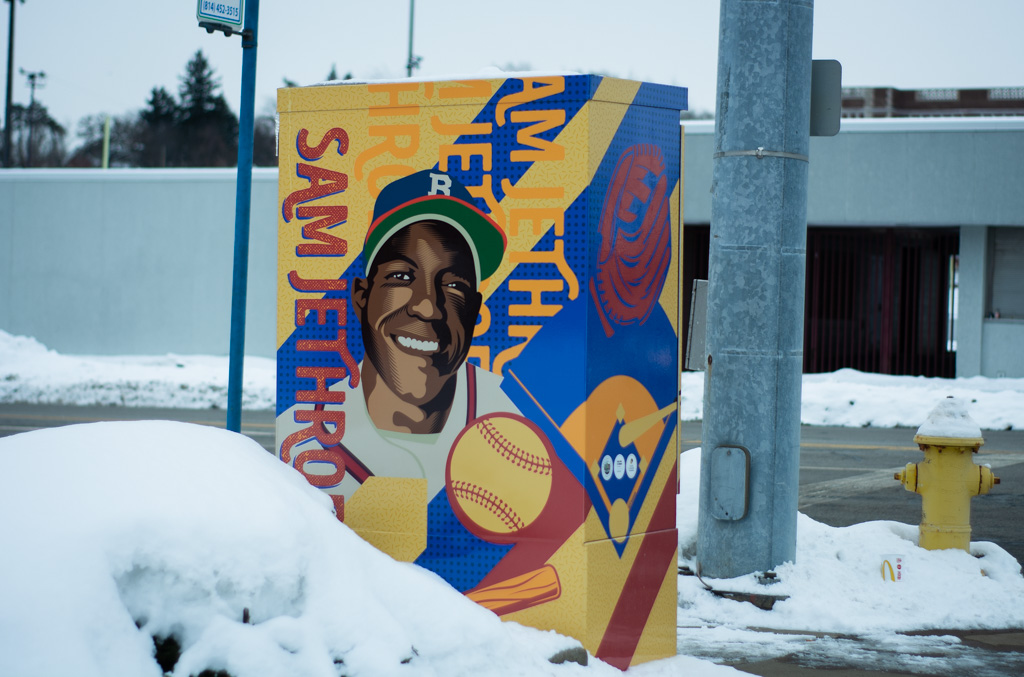 Sam Jethroe was named the National League’s Rookie of the Year in 1950, at age 32, having honed his skills for years prior. He remains the oldest person to receive the honor.

After Jackie Robinson broke the color barrier, Jethrore was the fifth Black player to join a Major League team.

The center fielder was a switch hitter and star of the Negro Leagues, playing for the Buckeyes in both Cincinnati and Cleveland - who were owned by Erieirte Ernest P. Wright - before playing for the Boston Braves (now the Atlanta Braves) and the Pittsburgh Pirates.

Following his baseball career, he returned to Erie and ran Jethroe’s Steakhouse on 18th and Parade Street. In 1994, he led a class action lawsuit against Major League Baseball to fight for pension payments for Negro League players. Though the lawsuit was dismissed, a committee was formed in 1997, beginning yearly payments for those players. 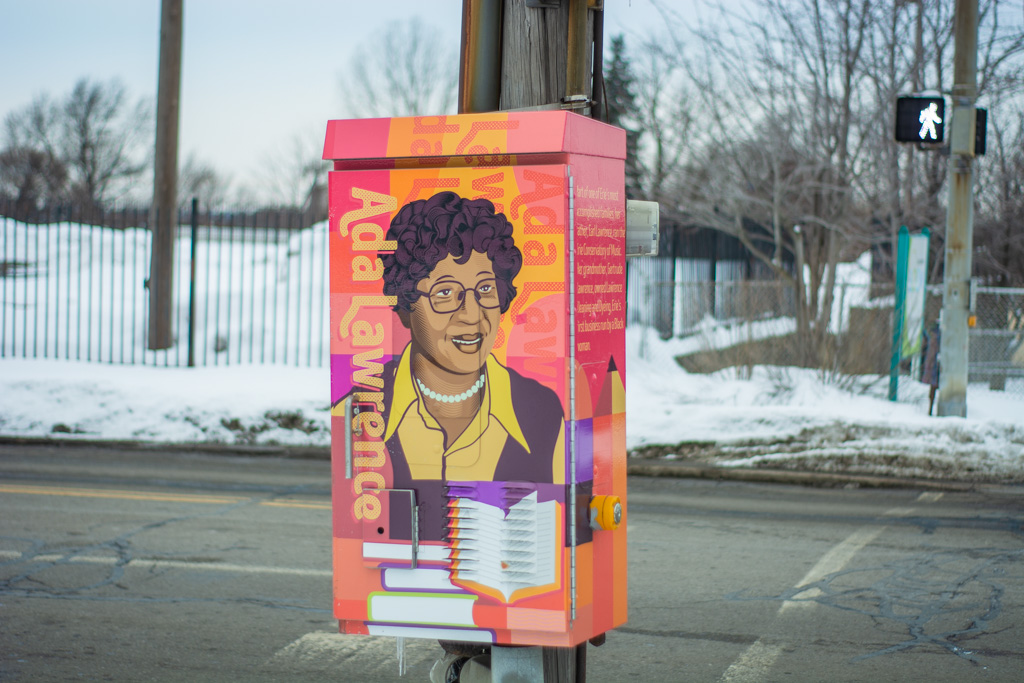 As the first Black teacher hired in the Erie School District in 1946, Ada Lawrence had a lifelong commitment to education and the betterment of her community.

In addition to teaching at Wayne Elementary School for 36 years, she served on the board of the Gertrude Barber Center and helped to found Erie’s Martin Luther King Center on Chestnut Street.

Part of one of Erie’s most accomplished families, her father, Earl Lawrence, ran the Erie Conservatory of Music. Her grandmother, Getrude Lawrence, owned Lawrence Cleaning and Dyeing, Erie’s first business run by a Black woman. 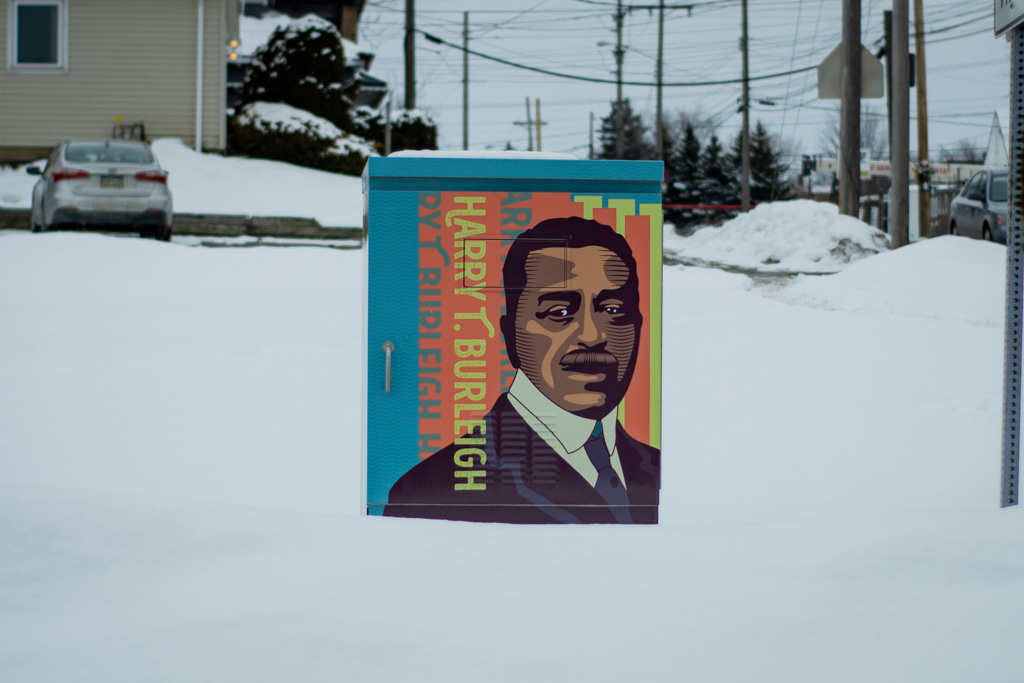 Burleigh was born in Erie in 1866. He had a deep baritone voice and went on to attend the National Conservatory of Music. There, he sang traditional songs his grandfather, Hamilton Waters, taught him. He soon befriended the school’s director, composer Antonin Dvorak.

His arrangements of songs, like “Swing Low Sweet Chariot,” “Let Us Cheer the Weary Traveler,” and “Deep River,” had a profound influence on western music. By being one of the first to help translate the feeling and spirit of the Black experience to academia, Burleight’s impact reaches virtually every facet of the American songbook.

Burleigh passed away in 1949 at the age of 82. His childhood home stood at 137 East 3rd Street, between French and Holland Street. 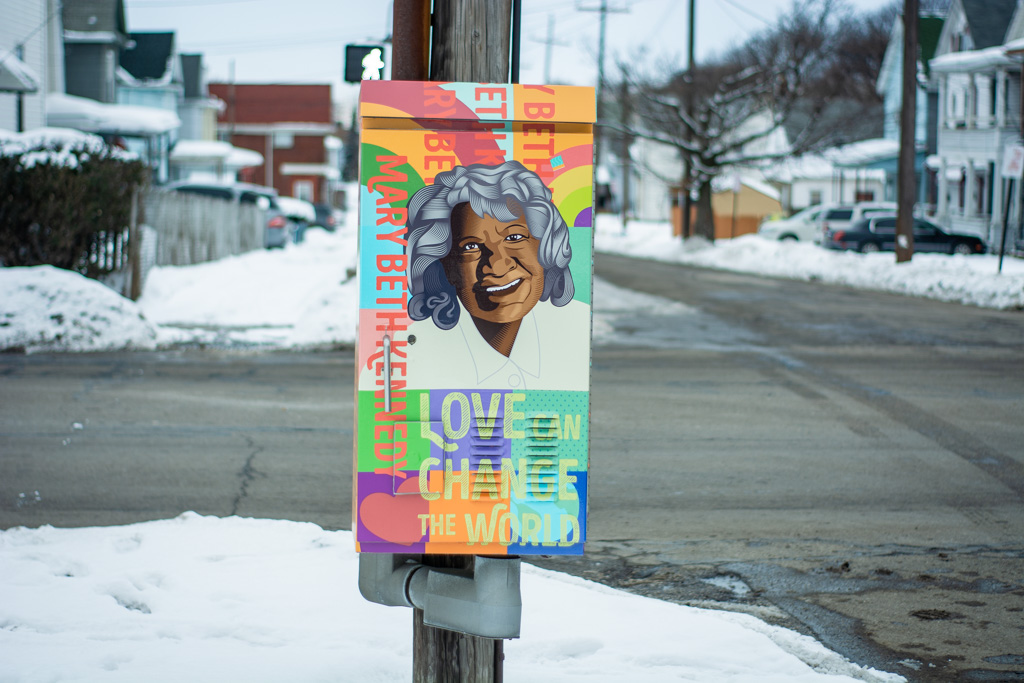 With a lifetime of work, Mary Beth Kennedy continued to hold up “love” and “community” in everything she did.

With the help of her husband, Rev. Charlies C. Kennedy Sr,, she helped found the COmmunity of Caring, providing food clothing, and shelter to those indeed. They also launched the Community Country Day School and what is now known as Community Shelter Services, Erie County’s largest homeless shelter.

Mary Beth spent years doing missionary work in Liberia, Haiti, and the Dominican Republic before focusing on Erie. She was often known to lead singalongs of her own original song “Love Can Change the World.” 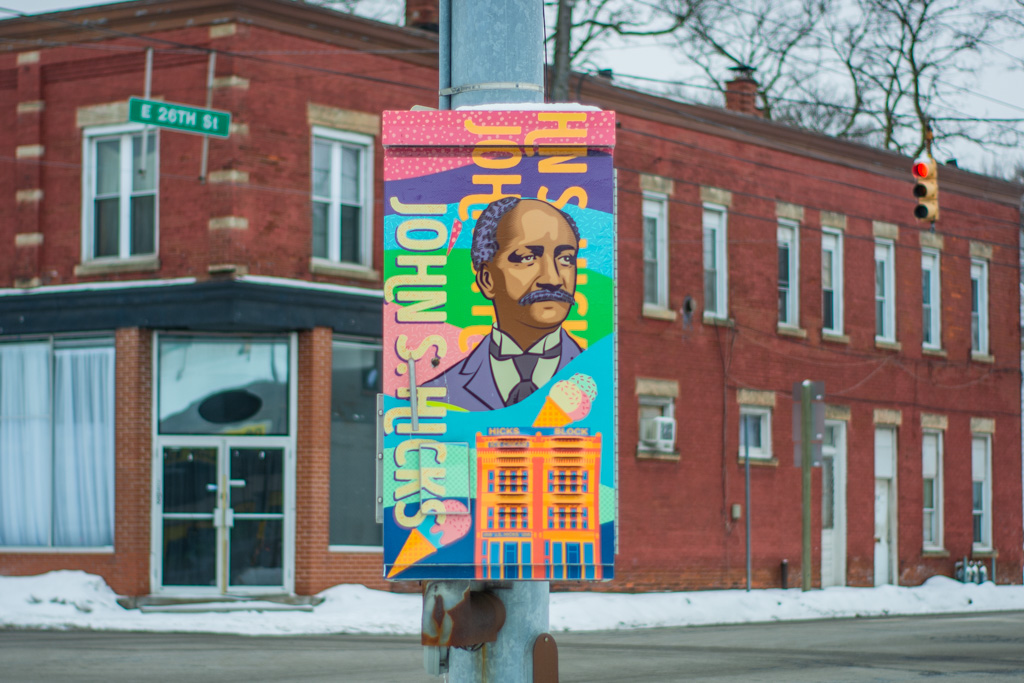 John S. Hicks was an inventor and businessman, making and selling some of the best ice cream in the state.

Originally operating out of his location on Turnpike Street (now Griswold Park), Hicks moved to a three-story building at 1218 State Street in 1892. There, he manufactured ice cream using his own patented designs. The building was known as “Hicks Block,” and could produce 120 gallons of ice cream per hour.

In 1915, he was chosen by Pennsylvania’s Governor to be a delegate to the Illinois National Half-Century Exposition to celebrate the 50th anniversary of the Emancipation Proclamation. 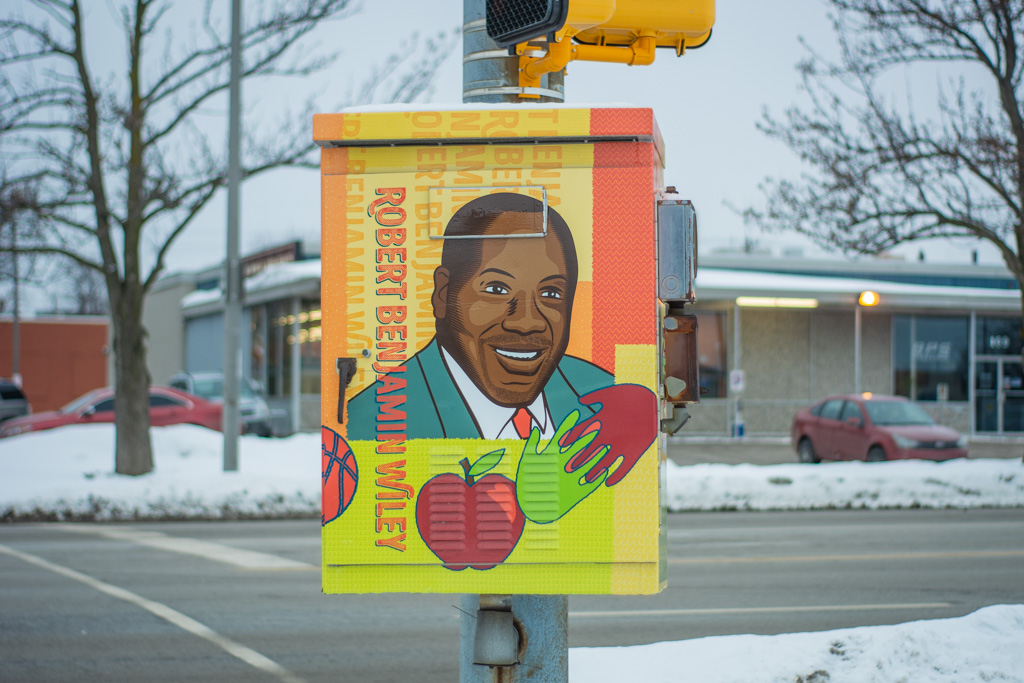 A nearly unparalleled community leader, Robert Benjamin Wiley always looked to better the education system, and to help children and adults in need. 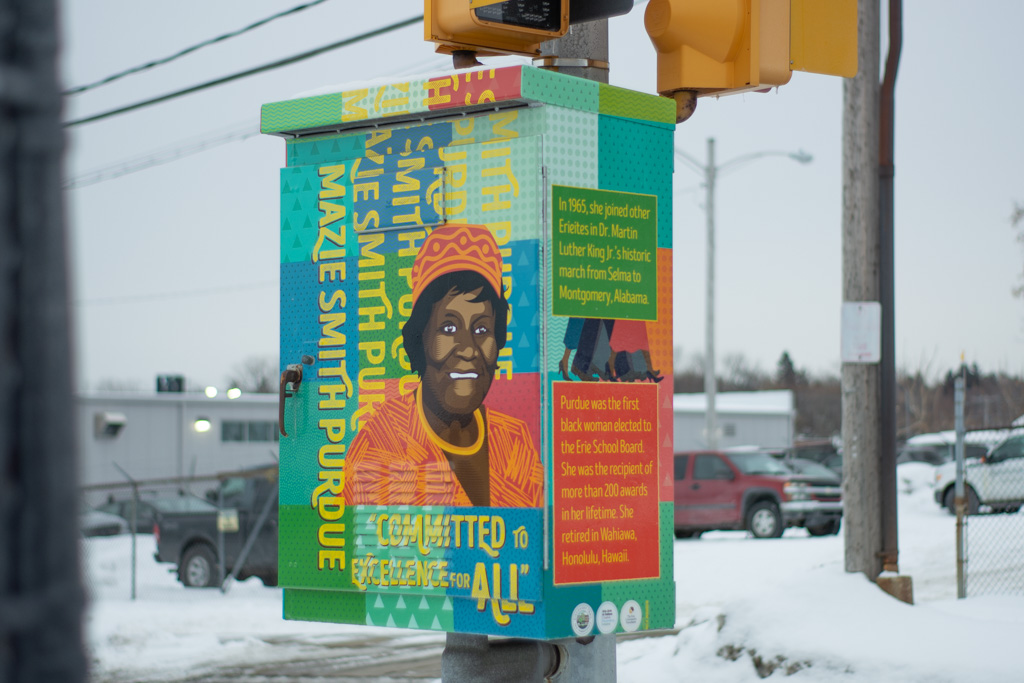 She helped to found Erie chapters of the National Council of Negro Women and Negro Business and Professional Women, and the Conference on Black Basic Education. She began after-school programs and self-esteem programs with the Shiloh Baptist Church, among many other programs.

In 1965, she joined other Erieites in Dr. Martin Luther King Jr.'s historic march from Selma to Montgomery, Alabama.

Purdue was the first black woman elected to the Erie School Board. She was the recipient of more than 200 awards in her lifetime. She retired in Wahiawa, Honolulu, Hawaii.

Should we make this official?
Celebrating a Successful Campaign: The 2020 United Arts Fund Raises $794,934