In January 2019, Erie Arts & Culture was awarded a Shaping Tomorrow grant from the Erie Community Foundation to support our New Horizons initiative. One of the stated objectives of this initiative is to reinforce positive emotional bonds between people and place. In April, Erie Arts & Culture brought Peter Kageyama, author of “For the Love of Cities: The Love Affair Between People and Their Places” and the follow-up book “Love Where You Love: Creating Emotionally Engaging Places,” as the first installment of the 2019 Placemaking Speaker Series.

While in Erie, Peter was led on a walking tour of Erie’s neighborhoods. At the end of the tour, Peter visited Bicentennial Tower and met Brenda Sandberg, the Executive Director of the Erie-Western Pennsylvania Port Authority. Brenda explained that the Port Authority was exploring new ways to activate Dobbins Landing. Peter was quick to make a suggestion, embellish the 12,000 square foot second-level concrete observation deck with a mural.

Later that week, I re-approached Brenda on this topic. I suggested that we contact Iryna Kanishcheva, a street art curator I know from my time working for the Cultural Council of Greater Jacksonville. After seeing a picture of the observation deck, Iryna immediately accepted the project and outlined a starting budget. That same day, the Port Authority committed to being Erie Arts & Culture’s partner in the large scale mural project.

Working with Iryna, Erie Arts & Culture and the Port Authority selected the artist SatOne, who was born in Venezuela but now lives in Germany, for the project. The decision was made after reviewing his portfolio, which includes mural projects from all around the world. As an international artist, SatOne has completed projects in Austria, Australia, Brazil, Canada, France, Germany, India, Italy, and Norway. Erie is only the second city in the United States to have one of his murals on exhibit.

SatOne arrived in Erie in the evening on Wednesday, August 7. After picking up supplies and materials, we headed to the project site to begin the process of transforming the observation deck. We were joined by Ceasar Westbrook, an Erie based artist who primarily maintains a studio practice but is interested in expanding his skill set to include murals.

It took a mere six days to complete the project, which is astonishing considering the scale. Ceasar worked for the duration of the project as SatOne’s paid understudy, forming a deeper understanding of process and materials. Iryna also assisted with the project. 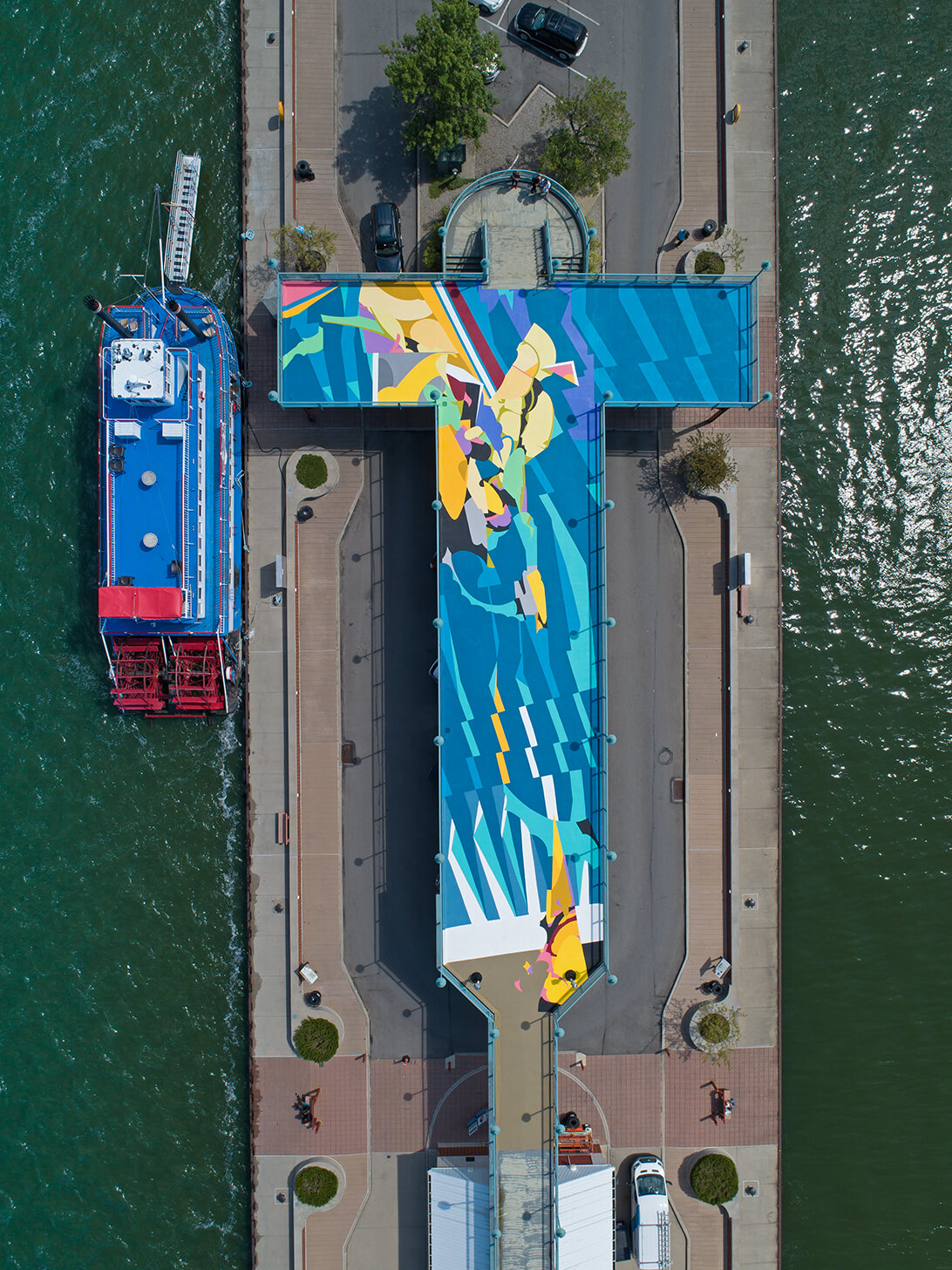 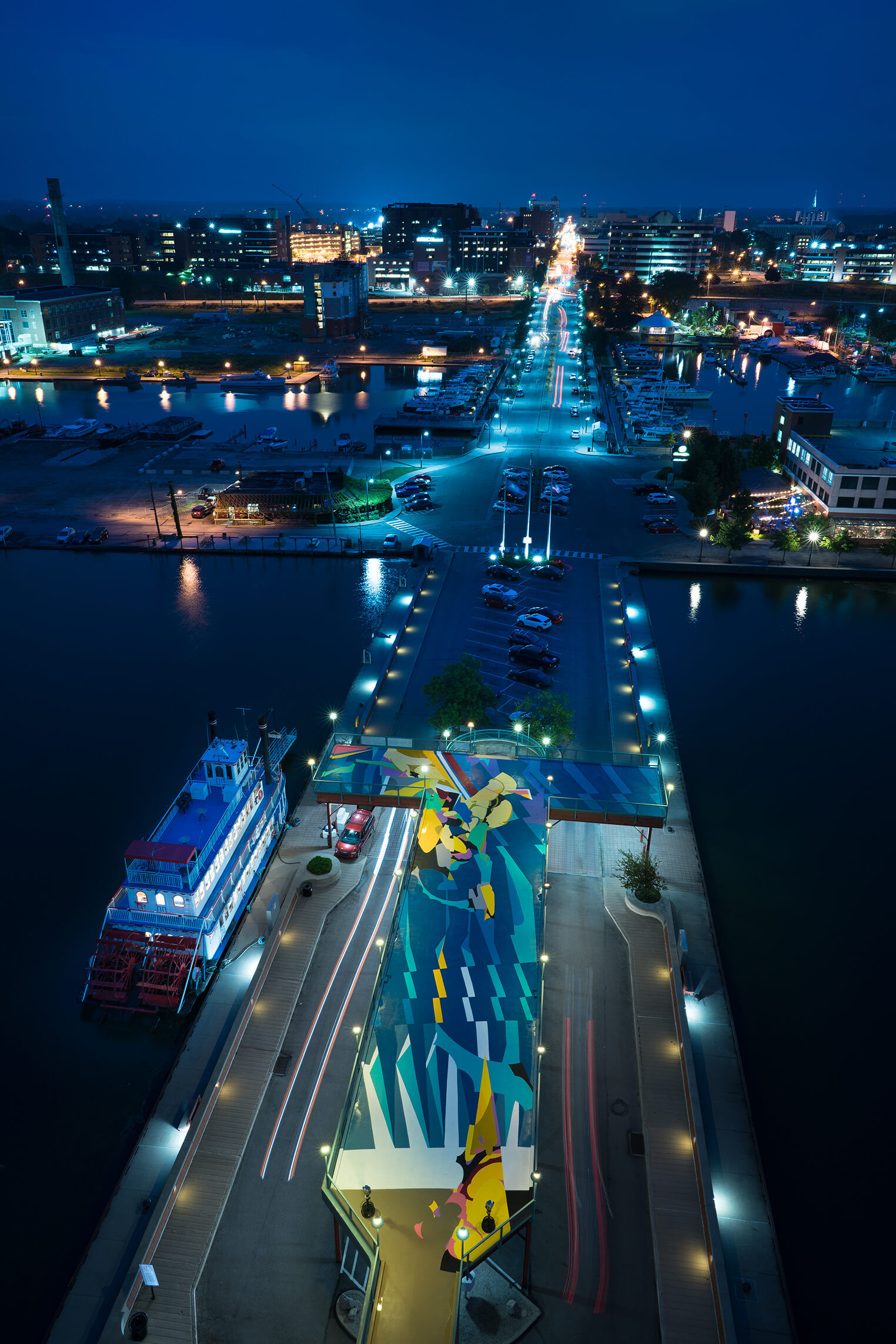 Curiosity is a driving force in SatOne’s life. The artist is drawn to engage with people and environments that offer unique stories. It leads to the discovery of situations that others may overlook in their daily routine.

This is why he finds the definition of flotsam so intriguing - people or items that have been rejected or regarded as worthless. In traditional maritime culture, this referred to the wreckage of a ship and what debris may eventually wash ashore. But, as people, he thinks all of us, at one point in our lives, experience a momentary sensation of feeling cast aside and unvalued.

Within this image the viewer may discover abstract objects that were carried to the shoreline by the momentum of the spuming waves. The triangular element points across jetted ripples in the water to the wreckage from which it came. And in that, we find the story of a treasure waiting on the sand to be reclaimed by those who are curious. Once discovered, how will this item be re-imagined and what new purposes may it serve?

Erie, Pennsylvania has lived a story similar to many other cities located in what’s referred to as America’s rust belt. Our economy boomed well into the 20th century as a result of the Industrial Revolution. But, globalization and automation have brought a need to adapt and evolve. In order to survive, we have to shift our attention to new horizons that remain ahead; instead of holding tightly onto the nostalgia of where we’ve been.

Like never seen before, Erie is generating a momentum that will lead to measurable change. Under Mayor Schember’s administration, there is a focus on developing Erie’s Downtown and Bayfront to be a world-class destination. As an arts administrator, I believe deeply that the arts can play an important role in encouraging both residents and tourists to see Erie differently.

Jetsam is a maritime term that exists alongside flotsam. It is defined as materials that have been intentionally thrown overboard from a ship to lighten the load of the vessel. As cities, such as Erie, work to embrace new ideas and values, what old ways of being must be abandoned in order to move forward? In our present time, we must be intentional with what assumptions, ideas, and behaviors we keep and what we must discard to become a thriving mid-sized American city in the 21st century. SatOne’s work is a beautiful metaphor for Erie.

Erie Arts & Culture is working with Imagine AR to integrate augmented reality into SatOne’s mural. When viewing the mural, a person can point their smartphone at different spots on the surface to receive additional information about the mural, including photos of the mural in progress. This will provide viewers multiple ways to interact and engage with the piece.

Painting a surface mural poses some logistical challenges, and Sam Catania Painting has helped us address those challenges. The company is applying a water-based clear coat to the mural to assist with durability and longevity. This will help extend the life of the mural and keep the colors vibrant. 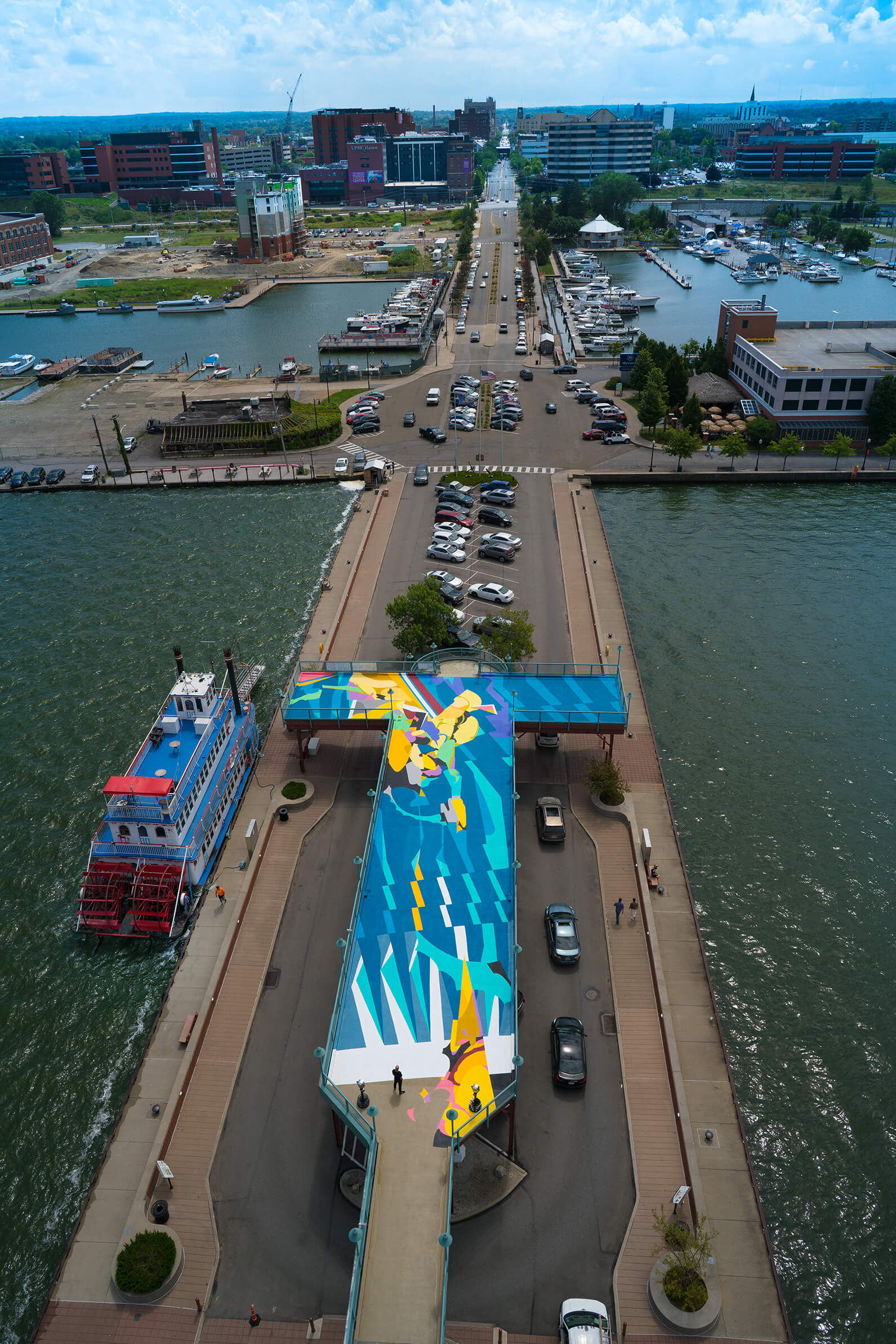 Mayor Schember has a stated priority of positioning Erie’s Downtown and Bayfront as a world-class destination. I have seen, first hand, how large scale murals, such as this, stimulate cultural tourism. I have also seen how these types of projects lead to recognition in international street art publications. SatOne alone has more than 33,000 followers on Instagram, who responded with great excitement when he posted a preliminary photo of his new canvas.

That’s why I’m thrilled to announce that we are slated to have three more large scale projects initiated and completed before the end of fall 2019. In early September, we will welcome Zedz to Erie. Zedz is an infamous Dutch artist who currently lives and works in Milan, Italy. Zedz plays with geometry as a tool for self-expression and he incorporates typographical and lineal techniques into his work. Like SatOne, Zedz has painted murals around the world, but he has never painted a mural in the United States.

This project is being supported by the Zaphiris Family Limited Partnership and the mural will be created on the building located at 121 West 12th Street, which serves as an entry point to Downtown Erie from the West 12th Street Industrial Corridor.

Erie Arts & Culture also recently received a very generous gift from the Graff family. The Graffs moved to Erie in recent years and settled here as their post-retirement home. Inspired by the recent press and the desire to see more vibrant public art in Erie, the Graffs made a donation to fund another large-scale mural in Erie’s urban core. We are now working to select both a site and the appropriate artist.

Additionally, the Sisters of St Joseph Neighborhood Network, with support from PNC through Neighborhood Assistance Program tax credits, will commission Hyuro, an Argentinian female street artist who now lives in Spain. Hyuro’s work features dreamlike compositions and she blends social issues with surrealist sensibility. The human form is often the central focus in Hyuro’s work. Hyuro’s mural will be located on Parade Street on the exterior of ROG’s Rigging.

Like SatOne’s mural, each of these projects will include at least one Erie based artist as a paid understudy. Iryna Kanishcheva will also continue to work as the project curator. 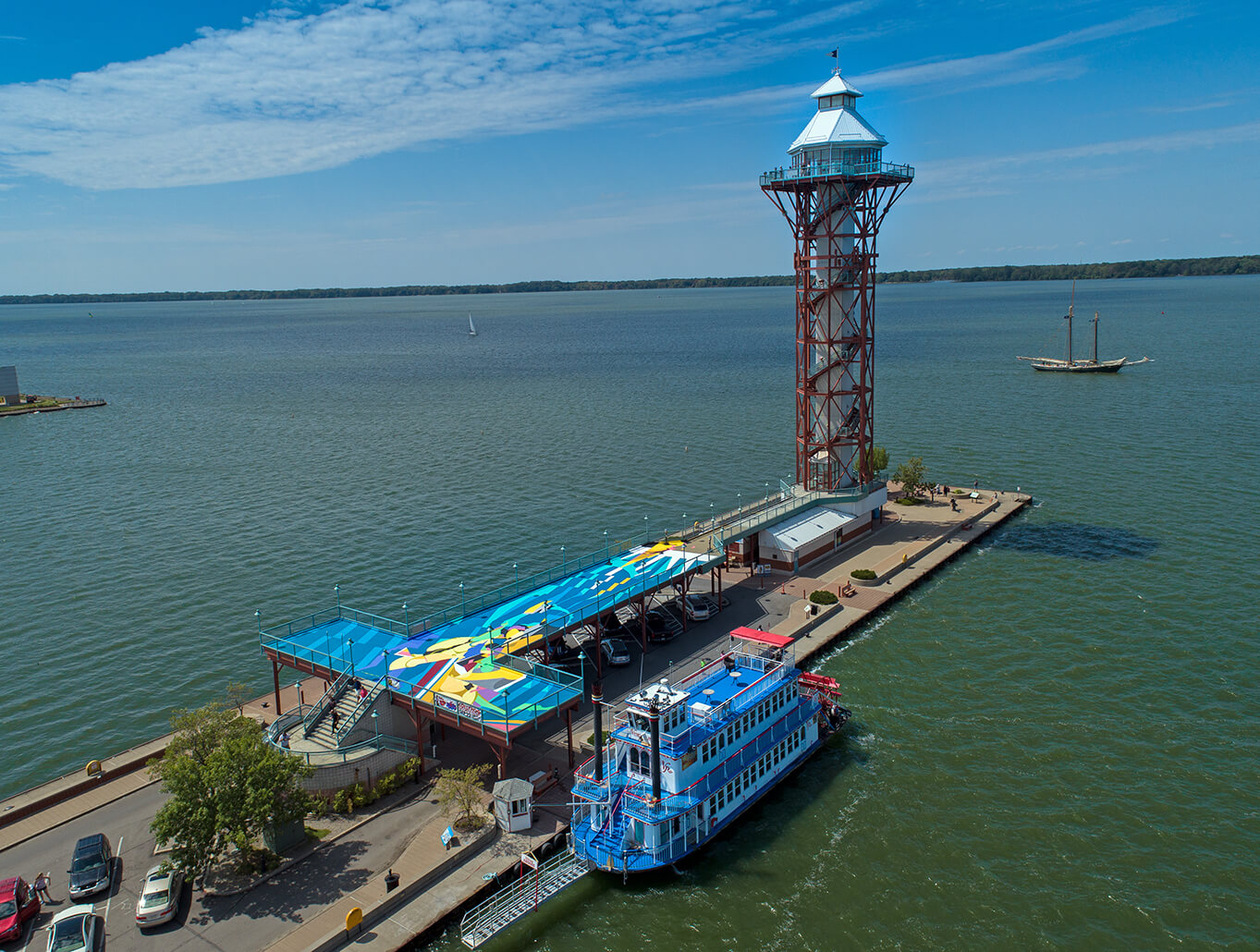