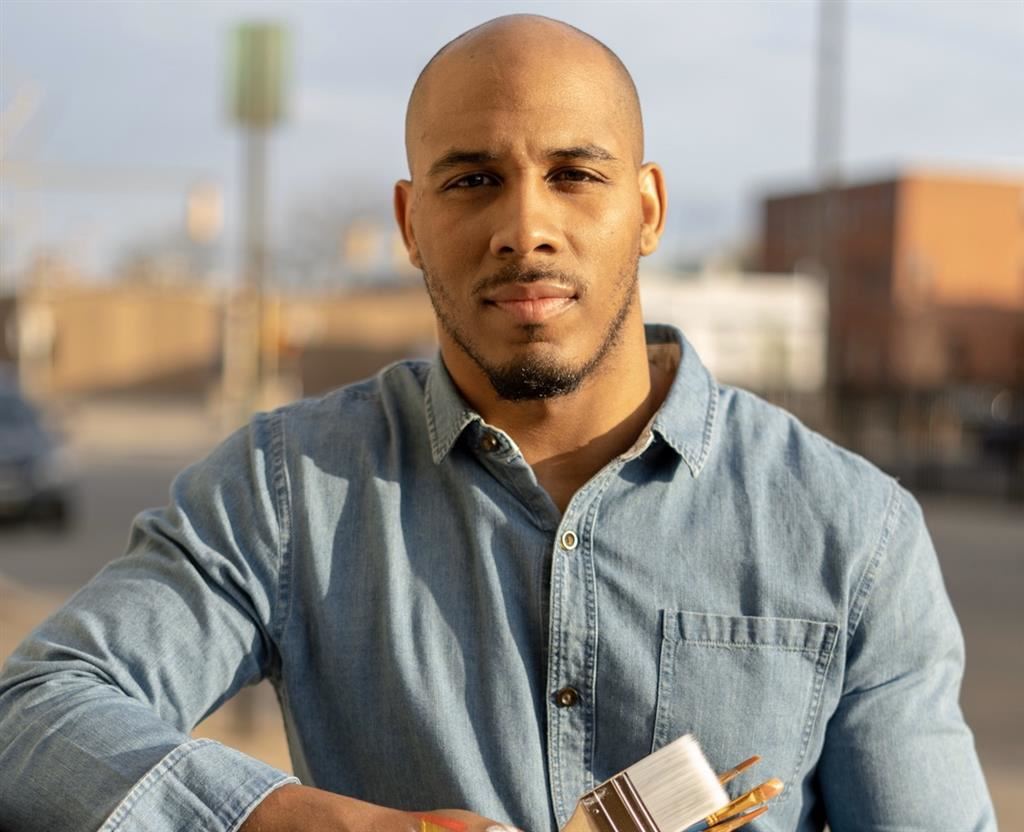 We recently caught up with rostered teaching artist and painter Ceasar Westbrook, who just completed a residency at Northwest Pennsylvania Collegiate Academy.  The residency engaged about a dozen high school students in creating a mural in tribute to the late dance instructor, Carla Hughes.

Carla was a beloved educator in Erie for nearly twenty years, president of the Erie Dance Consortium, founding member of the Erie Dance Film Festival, and a teaching artist with Erie Arts & Culture.  As a dance instructor at Collegiate, Carla actually initiated the project herself, reaching out to Ceasar early last year to ask him to paint a mural in the school’s dance studio.  When she passed away unexpectedly in May, the project was put on hold, until Carla’s successor, Kristen Weibel, followed up with Ceasar, reconceiving the project as a tribute to Carla.

For this residency, the students took part in both the design and the painting of the mural.  “I created a kind of digital rendering, in a coloring book style,” Ceasar explained.  “They colored it in and we hung them on the wall, and discussed what worked well in the space.”  This collaborative planning process allowed the students to take ownership of the mural.  “They gained an understanding of the whole process,” Caesar notes. 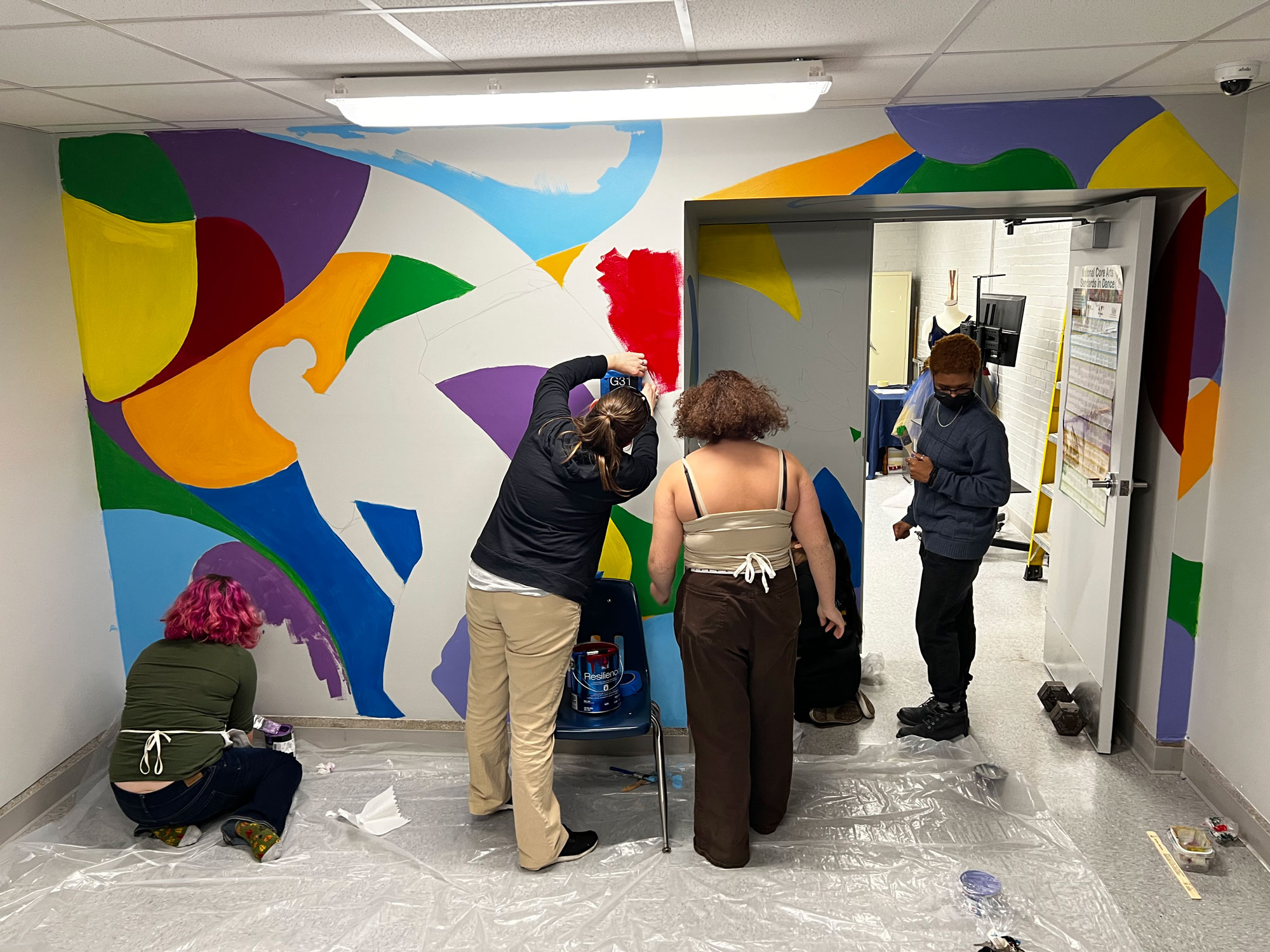 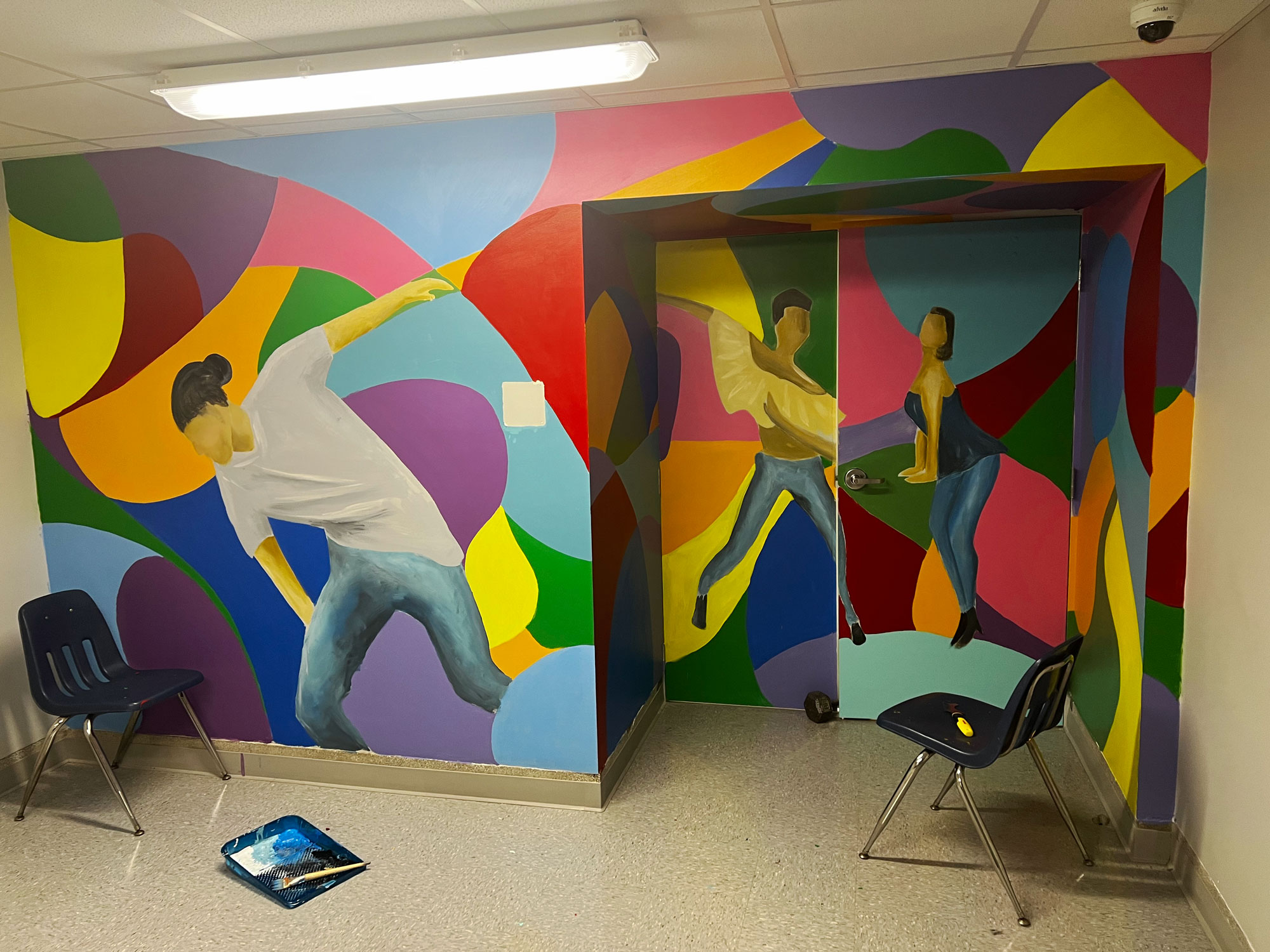 In fact, it’s the process itself that is of particular importance to Ceasar as a teaching artist.  “It’s ultimately not about the piece, but what the students are able to pull out of it.”  In the case of creating a mural, a lot of the skill building involves recontextualizing skills the students have honed in other classes.  “It’s about sharpening tools they’ve already acquired and building on them without the students even realizing it.”  Ceasar’s observations reinforce the importance of arts education as a way to strengthen the types of problem-solving that are required in a wide variety of disciplines.

Such problem-solving was an integral part of the project.  “Some parts of mural-painting can be tedious,” Caesar explains.  “Some of the colors–like yellow in this case–wouldn’t go on in a single coat, and required multiple coats.”  The artist prefers to let students find workarounds for such issues on their own.  “I like it when they try to fix things by finding their own approaches.  Sometimes, they’ll come up with some interesting ideas that wouldn’t have occurred to me, which is cool because it introduces me to something I haven’t seen before.  I’ll think ‘That’s clever, I’m going to try that myself.’”

This self-directed approach to solving creative problems allows the students to grow in their confidence.  “I wouldn’t always get there before them, so sometimes I’d arrive and they’d already have gotten started.  They really took the lead on the project, and developed a system on their own.”  Caesar encouraged the students to make adjustments to the design as they saw fit throughout the execution, adapting the project along the way into something that met the needs of the space and their increasingly perceptive aesthetic viewpoints.  “I told them if they're not feeling it, they should change it.”

In the end, the process of creating the mural became not just a way for the students to learn to produce an artwork from start to finish, but a way to process their grief, and mourn the loss of their dance teacher.  Over 200 people attended the dedication of the mural, which featured a performance of Carla’s last choreographed dance by students she worked with.

Fellow teaching artist Antonio Howard often says that “the art is the excuse,” meaning that the creation of a collaborative artwork is more important than the finished piece:  painting a mural is an excuse for, in this case, students to come together, learn new skills, hone already existing ones, and work through their grief.  It’s a sentiment that Ceasar agrees with.  “It’s all about interaction and experience.  I think there’s something important in every interaction we have with others, something that we’re meant to take with us as we move forward.”  We’re confident that the students at Collegiate, as well as the many who miss Carla, will have a lot to take with them from the experience of engaging with the mural, and we’re grateful for all that went into its creation.