Ibrahim and Belal Al Dehnah are a father and son duo from Syria. They both sing and play traditional and 20th century popular ballads from the Arab speaking world. Ibrahim plays the oud, a relative of the lute and one of the oldest Arab instruments. Belal plays the doumbek, also known as the goblet drum common to North Africa and the Middle East, which has a ceramic or metal body.

Their family is from Daraa, Syria, a city about the same size as Erie with roots in antiquity. Both musicians are self-taught learned from community and play exclusively by ear. Ibrahim started to play the oud when he was 15 years old. He says he would listen out his window at night. If he heard someone playing the oud, he would follow the sound, walking through the old town, to find and observe the musician. The old city of Daraa has stone roads and stone houses, all built close to each other. It is easy to hear when someone is playing music. The sounds float through the entire old city. Belal grew up not just with a musical father, but with two older brothers that played doumbek and organ. His mother and five sisters all loved music, too, and supported them. Belal started playing the doumbek when he was seven.

They focus on what many say is the Golden Age of Arab song, from the 1920’s – 1970’s They play ballads from Syria, Egypt, Lebanon, and other Arab-speaking nations from recordings, the radio, and movie soundtracks. The songs are about love in all its forms, from passionate infatuation, to love between brothers, to the years of love between a husband and wife, even love for one’s homeland. The songs demonstrate the great poetic force of the Arabic language and document the history and culture of the region. The songs are shared across the entire Arab-speaking world, but Ibrahim says it is important to understand and know the origin of each. “If we know we will play for people from Lebanon, we must be sure to give them lots of Lebanese songs.”

They arrived In Erie in 2017. They are an important part of Erie’s Syrian community and often play for wedding and other social events. They have performed at World Refugee Day celebrations and at the Erie Art Museum. In 2020 they were virtual artists-in-residence at McDowell High School. They hope to continue to share their music with the wider community.

Arabic music is like a family: everyone understands each other. It’s a team. Every instrument has its part. Belal plays the doumbek drum. It keeps the beat and controls all the musicians with the tempo and energy. Ibrahim plays the oud, an ancient string instrument. The oud is in charge of the melody and is the leader.

We love to play Syrian and other Arab music. We were both born with the desire to make music and to share it. This is natural for artists to want others to enjoy their work. It is important for the Syrians in Erie to have us play because we must have our live music at our big celebrations. It is not a real wedding or party without our songs.

Some people don’t know about our culture and we also want to show them our music, too. Our songs are about history and peace between cultures. We want everyone to learn how we live, how we raise children, and the beauty of the Arabic language. We are proud of our long history.  We tell our audience, do not be afraid if you do not understand our words. You can still feel our music, feel our love for each other, and feel the connection that we are all human. 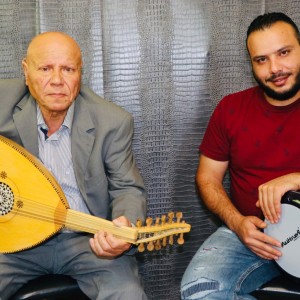