My world is sound and vibration.  My medium is music, particularly jazz and my goal and purpose with this music is to traverse dimensions while bring the listener along.  I also have a cultural agenda to forward knowledge and understanding of the Black Experience which is American history.  I accomplish this by playing, talking, teaching and living the Blues and a Jazz life.

Mikel Prester is well on his way to becoming one of the New Masters of Jazz.  Born in Philadelphia and raised in Meadville, Pa., Mr. Prester has had a love affair with music since the age 8.  His musical roots are deeply planted in Blues and Gospel music, via the late-great Dutches Overton of Bethel A.M.E. church.  She was his first mentor.  Mikel's talent was the further fostered and cultivated by his vocal and band teachers; Ms. MaryLynne Peters and Scott Cressley.  Mr. Prester was then guided through the multi-faceted world of Jazz by his late Shisho (master and mentor), Mr. Floyd A. Williams.  Mr. Williams played with Masters such as Duke Ellington, Count Basie, Sam Rivers and Chico Hamilton, to name a few.  Mikel has been a serious and trained musician for 40 years; the majority of that time was spent on the alto saxophone.  This is his main axe.  He excelled in science and the arts, especially music, obviously.  It was his 9th grad physics teacher, Mr. Roznowski who was himself a horn player when he was a child, that suggested that I go into music.  In high school he was selected out of thousands of music students to attend the Pa. Governor's School of the Arts.  He was among 200 students picked to attend.  In 1991 Mikel matriculated at the University of the Arts where he earned a Bachelor of Music.  While there, he had the pleasure of having the best and top players and educators in the world.  Mikel's highlight at the university was to study with Greg Osby.  Mr. Prester has performed with some heavy-hitters like Wynton Marsalis, Ian Hendrickson-Smith, the Harlem Boys choir, the Vienna Boys choir, Sharon Jones and the Dap Kings and others.  Mikel's work has been sponsored by big companies like Hennesy.  He has had working bands since the age of 12.  While in NYC he had bands such as The Sidecar Bar Band, D'Flo, Jsan and the Analog Sons, Blaakkgodd and many other acts and ensemble.  "Mikel, you have a natural and great capacity for making music."  -Ron Kerber, sax teacher at the Philadelphia College of Performing arts, Universtiy of the Arts. 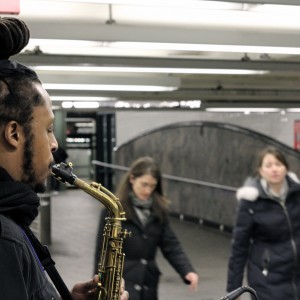