Tasana is not only an excellent performer, but is a gifted workshop leader. He can lead drum circles, and teach drumming and dance to beginners as well as seasoned musicians. He has done work with children on the Autism Spectrum, senior citizens, youth of all ages, and educators.

A native of Guinea, Tasana Camara comes from a long line of well-known West African musicians who play traditional Mandinka music on hand-made instruments. Tasana makes and plays an African harp called the Kora, a wooden xylophone called the Balafon, and the various drums of the Mandinka. Tasana has performed professionally throughout the world including appearing with the Ballet Senegal and the National Ballet of Guinea and a Carnegie Hall performance with the Chicago Arts Orchestra. In 1990 to 2003 he was part of the 10-member Guinean supergroup Fatala. This ensemble, based out of Holland, toured extensively throughout Europe.  In 2005 he came to America at the invitation of the University of Florida. Since 2012 his base in the U.S. is Oil City.

He is in demand for workshops and residencies at universities, high schools and elementary schools in Northwest PA. To him, music is a way to bring people together. His training in Guinea as a traditional griot, or djeli, prepared him to heal relationships and create peace using music. Highly intuitive, Camara combines high energy music with a gentle personality and he is equally at home with preschoolers, teens, college students and senior citizens.

Short video of Tasana working with middle school students in 2018

Tasana performing on the kora

Documentary about Tasana by McDowell High School filmmaker in 2020 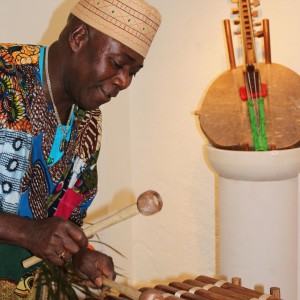