Nearly ten years ago when she originally lived in Erie, PA, Amanda wrote and directed, "Misguided Hastiludes," a original commedia dell'arte play for a nearby festival. When she moved to Maryland, The Wandering Fools successfully performed at various SCA events and festivals including Spoutwood Fairie Festival, Wicked Faire, Virginia Faery Festival, Maryland Faire Festival, Artscape Festival and Balticon. As a teacher for eleven years, Amanda has created a variety of commedia and movement programs for students across Pennsylvania and Maryland. She is also a passionate and skilled renaissance dance instructor with nearly fifteen years of experience.

Amanda enjoys performing a variety of female characters including Columbina, Pasquella (the Witch), Columbina as a courtesan or servetta, or an enthusiastic and peppy Isabella. She recently started experimenting with masked zanni characters in the skit, "Dottore's Sausages." Amanda frequently teaches a variety of commedia classes at SCA events and Pennsic and she recently learned how to make leather masks. Amanda is thankful she is able to bring laughter, surprise, and comedy into the lives of every audience!

Amanda returned to Erie in January 2019, and she is looking forward to creating and pursuing many local artistic opportunities! Please reach out; she is open to local art, theater or renaissance dance collaborations.

Amanda Mulder is an acclaimed actress, teacher, renaissance dance instructor, writer, and historical reenactor. Her specialties include movement-based arts, especially commedia dell'arte theater and Italian Renaissance dance. She was troupe founder and capocomico of The Wandering Fools, a commedia dell'arte troupe based in Baltimore, MD. Although Amanda left the group behind, she has plans to start a similar troupe of fools in Erie, PA sometime in the future.

What is commedia dell'arte?

Commedia dell'arte is an improvisational theater style established during the Italian Renaissance. Amanda focuses on recreating commedia dell'arte in the style from the Italian Renaissance, where a troupe is managed as a "fraternal compagina," a group of actors equally vested in writing, character development, rehearsing, acting, directing, costuming and overall troupe success! Ambitious, comical actors bring the traditional stock commedia characters to life on stages or festivals through physical, verbal and situational comedy. Commedia actors write a scenario, memorize the plot milestones and put on the mask to see what transpires! No show is ever the same twice!

Where is commedia dell'arte performed?

Anywhere and everywhere! Commedia dell'arte requires minimal props and scenery, so any performance space can be good as long as there is an audience and room for the fools to be zany! Amanda has brought laughter, merriment, and joy to various modern conventions, festivals, and street theater spaces. She has been known to crash local parks "flash mob" style to randomly cause shenanigans and innocuous chaos. Along with writing, developing, and acting in original shows, Amanda teaches various classes regarding current research and historical facets of commedia dell'arte. 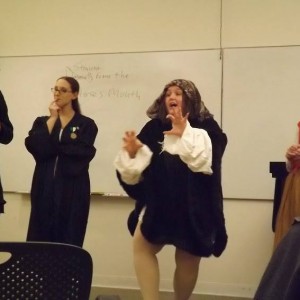 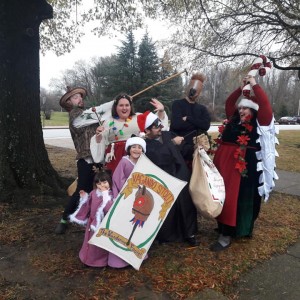 A parade of wandering fools! 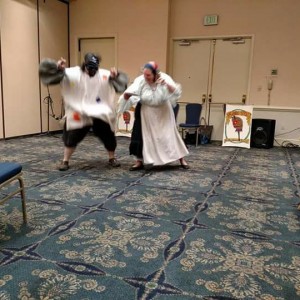 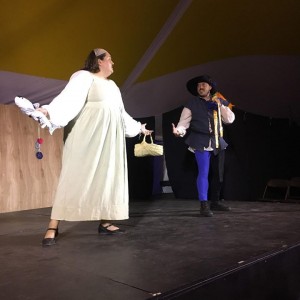 Bringing the fools to the stage! 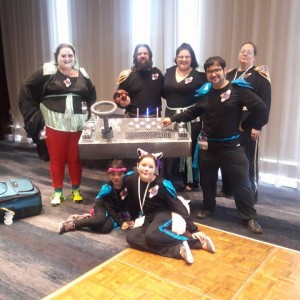 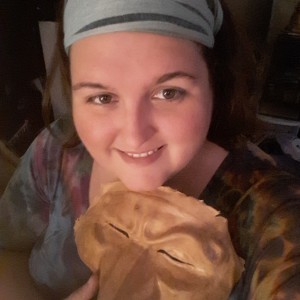 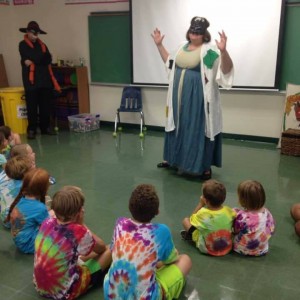 Teaching commedia to the young fools of the future.