Public art is any work of art that has been planned and executed with the intention of being experienced in the physical public domain. Common examples representing visual art disciplines include memorials and monuments, sculptures, murals, mosaics, vinyl wraps, and projection mapping.

Public art can be either permanent or temporary in nature. When permanent, it has an indefinite life span and becomes part of the community’s built environment. It is intended to be preserved over time, requiring maintenance and conservation. When temporary, it has a predetermined life span, usually not exceeding more than three years. Temporary public art is often site specific or in response to a time-sensitive need.

Public art is any work of art that has been planned and executed with the intention of being experienced in places that are freely accessible to everyone. Common examples representing visual art disciplines include memorials and monuments, sculptures, murals, mosaics, vinyl wraps, and projection mapping.

Public art can be either permanent or temporary in nature. When permanent, it has an indefinite life span and becomes part of a community's built environment. Permanent public art, such as the bronze monument of Oliver Hazard Perry found in Perry Square, is intended to be preserved over time; requiring maintenance and conservation. Temporary public art, such as the annual Celebrate Erie chalk walk, has a predetermined life span, usually either weeks, months, or a few years at most. Temporary public art is often site specific or in response to a time-sensitive need.

The amount of public art in Erie is steadily growing. Ehren Knapp and Looking Glass Art Project, a partnership between artists Ed Grout and Tom Ferraro, each paint a number of new murals every year. Throughout Erie, you can also find sculptures and installations by John Vahanian, David Seitzinger, Evan Everhart, Jamie Borowicz, Brad Triana, and other artists.

In 2019, Erie Arts & Culture started extending invitations to international street artists to create large-scale murals in the urban core. Artists who traveled to Erie include SatOne, Zedz, and Evoca1. With each project, an Erie-based artist interested in advancing their skill set was selected as a paid understudy. These large scale projects are now a valued part of Erie's urban landscape.

For 2020, Erie Arts & Culture has commissioned Buffalo-based artist Shasti O’Leary-Soudant to work with the community to plan, design, fabricate, and install two new interactive sculptures, one in an east side neighborhood and the other in a west side neighborhood. An Erie-based artist will be awarded a paid opportunity to work as an associate artist on this project.

Public art in Erie is primarily funded through grants from organizations such as Erie Arts & Culture, the Erie Community Foundation, Erie County Gaming Revenue Authority (ECGRA), the Pennsylvania Council on the Arts (PCA), or the National Endowment for the Arts (NEA), or through private contributions from corporate citizens and community members. Many of the area’s Community Development Corporations, such as the Sisters of St. Joseph Neighborhood Network, Bayfront Eastside Task Force, Our West Bayfront, and ServErie, as well as Downtown Improvement Districts, such as Erie Downtown Partnership, have included investments in public art as part of their strategic plans for revitalization. 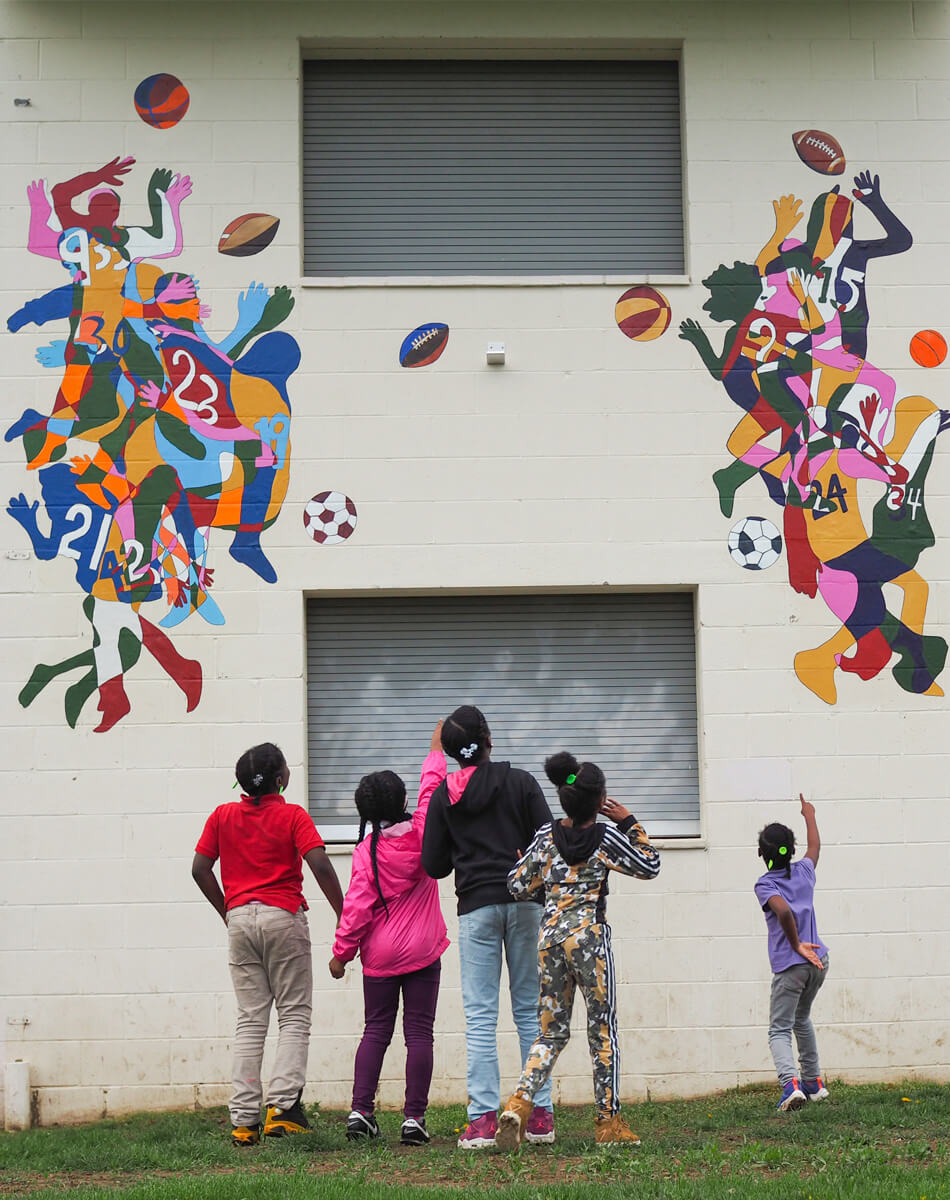 This mural was created through Erie Arts & Culture's 500th teaching artist residency. The residency was hosted by the Eastside Grassroots Coalition (EGC) and facilitated by teaching artists Tom Ferraro and Ed Grout. It engaged youth from the Urban Erie Community Development Corporation (UECDC), House of Mercy, and JFK Center to design and paint three separate murals that were installed in neighborhoods located in Erie's east side.

When President Roosevelt introduced the New Deal in 1933, it included programs that provided funding to create public works of art. The work commissioned was used as a form of government propaganda; maintaining national pride in American culture, while avoiding addressing the bleakness of the economy. Although controversial, New Deal programs, such as the Federal Art Project (1935-1943), altered the relationship in western society between the artist and the public by making art more accessible to all people.

One funding mechanism that Erie Arts & Culture would like to see implemented in the region is a “percent-for-art” program. Such programs allocate a small portion of capital construction or renovation budgets, usually one percent or less, for the commissioning and installation of public art. This can be implemented as a city-driven ordinance or adopted as part of operating practices by private developers.

The first program of this type in the United States was enacted in 1934 when the United States Department of the Treasury required one percent of the cost of constructing federal buildings to be applied toward art and decoration. In 1959, the City of Philadelphia adopted the first percent-for-art municipal ordinance in the United States. Now, more than half of the states in the US maintain percent-for-art programs. At the federal level, the General Services Administration has maintained the Art in Architecture Program since 1963, which allocates one-half of one percent of construction cost for art projects.

If Erie adopted a percent-for-art program it would pave the way for building the framework for a sustainable art in public places program. 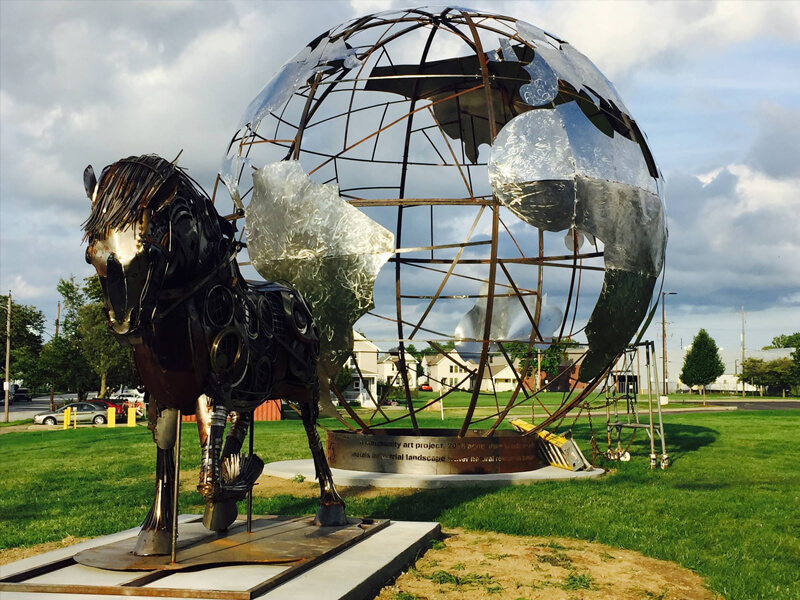 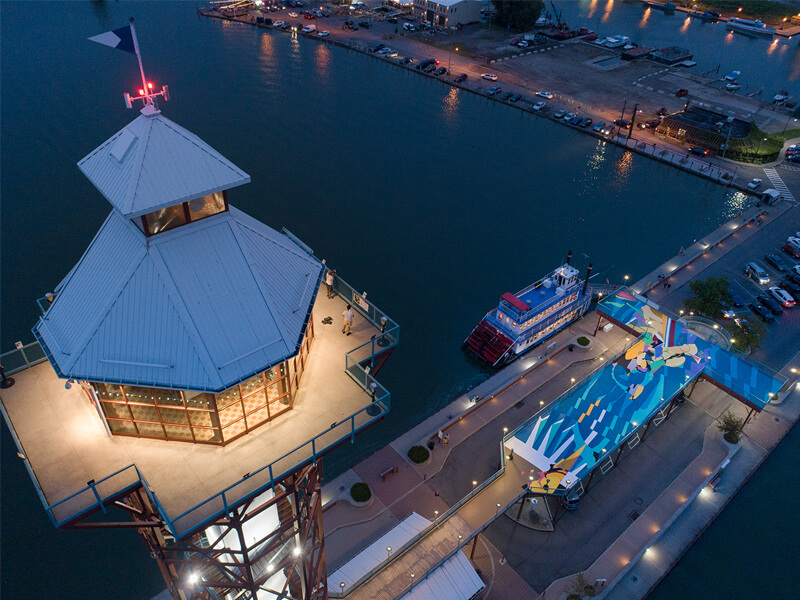 Erie Arts & Culture is available to consult on any public art initiatives occurring within our region. We are available to assist with:

In 2016, the Public Art Network (PAN) and Americans for the Arts (AFTA) published a list of best practices for public art projects, which can be found HERE. Erie Arts & Culture adheres to the published best practices and encourages others in the region to do so, as well. We encourage those in the region who are interested in leading a public art project to contact us for consultation during the early stages of planning.